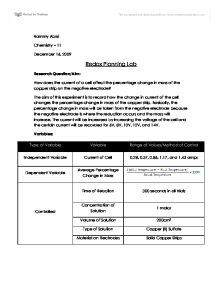 How does the current of a cell affect the percentage change in mass of the copper strip on the negative electrode?

Rammy Abssi Chemistry - 11 December 16, 2009 Redox Planning Lab Research Question/Aim: How does the current of a cell affect the percentage change in mass of the copper strip on the negative electrode? The aim of this experiment is to record how the change in current of the cell changes the percentage change in mass of the copper strip. Basically, the percentage change in mass will be taken from the negative electrode because the negative electrode is where the reduction occurs and the mass will increase. The current will be increased by increasing the voltage of the cell and the certain current will be recorded for 6V, 8V, 10V, 12V, and 14V. Type of Variable Variable Range of Values/Method of Control Independent Variable Current of Cell 0.28, 0.57, 0.86, 1.17, and 1.43 amps Dependent Variable Average Percentage Change in Mass Controlled Time of Reaction 300 seconds in all trials Concentration of Solution 1 molar Volume of Solution 200cm3 Type of Solution Copper (II) Sulfate Material on Electrodes Solid Copper Strips Variables: Materials: * 250ml beaker * 200ml of 1 molar Copper (II) Sulfate * 30 copper strips * Power supply (up to 14V) * Stop watch * Balance * Crocodile clips * Red and black wires * Ammeter Picture: Method: There will be three trials for each of the five different currents. ...read more.

To process the data there are multiple steps. An example of how to process the data into Average Percentage Change in Mass is shown below: First, the average of the final mass must be calculated: (0.57 + 0.60 + 0.47) / 3 = 0.55 g Then, after the average final mass is calculated the following formula is used: = 7.8% Therefore, the average percentage change when the currant is 0.28 amps is 7.8%. Table 2: Processed Data: Average Percentage Change in Mass at Different Currants of the Cell Currant of Cell (amps) � 0.01 amps Average Percentage Change in Mass (%) 0.28 07.8 0.57 14.9 0.86 18.9 1.17 25.0 1.43 28.9 Qualitative Results: * The copper strip on the positive electrode became a little black and some black debris began to fall off of it when it was in the solution. * When I was holding the copper strips in the solution, and my hands were still, the current stayed constant; however, when I put the copper electrodes further in the solution the current increased a little. This shows that surface area could have an effect on the currant. * The color of the solution did not change throughout the whole experiment; therefore, the concentration stayed constant. Graph: The error bars on the graph above represent the range of values, of percentage change in mass, for each currant. ...read more.