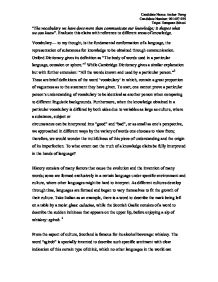 How does vocabulary shape our knowledge?

"The vocabulary we have does more than communicate our knowledge; it shapes what we can know". Evaluate this claim with reference to different areas of knowledge. Vocabulary- to my thought, is the fundamental conformation of a language, the representation of substances for knowledge to be obtained through communication. Oxford Dictionary gives its definition as "The body of words used in a particular language, occasion or sphere."1 While Cambridge Dictionary gives a similar explanation but with further extension: "All the words known and used by a particular person."2 These are brief definitions of the word 'vocabulary' in which, contain a great proportion of vagueness as to the statement they have given. To start, one cannot prove a particular person's understanding of vocabulary to be identical as another person when comparing to different linguistic backgrounds. Furthermore, when the knowledge obtained in a particular vocabulary is differed by both sides due to variables as large as culture, where a substance, subject or circumstance can be interpreted into "good" and "bad", or as small as one's perspective, we approached in different ways by the variety of words one chooses to view from; therefore, we would wonder the truthfulness of this piece of understanding and the origin of its imperfection. ...read more.

The phenomenon of this result is the same as asking a person to picture specific amount of objects without counting. This task would be simple to accomplish if the number is small (e.g.: 2), but would become rather difficult to imagine with numbers such as 38, without calculating objects one by one to fulfill the task. The visual obstacles that the Pirah� faces could be the reason of lacking emphasis on calculation in their culture, which other regions such as Europe and Asia have great reliance on it. Calculation provides the basic yet important skill: count. With the ability to count, people can perform precise techniques through varies aspects: the rhythm of music, the scale of architecture, even the proportion of ingredients in cooking. The Pirah�'s disability to count is caused by the narrowed perception that is shaped because of its culture, which affected the structure of its language by the lack of numeral vocabularies, thus causing the counting experiment to be visually challenged. Vocabulary to some extent, does limits the boundary of knowledge, by culture differences and formation of language in each country. However, there are situations when vocabulary represents the absolute linkage between knowledge. ...read more.

a word can sometimes be overcome and can even create less uncertainty, thereby decreasing the doubts of the existence of an universal knowledge within communication. To conclude, vocabulary to some extent does indeed shape our knowledge, which furthermore restrains our ability to perform knowledge. Language can only be reliable of transferring knowledge when there is a mutual or similar base of history or culture underneath the vocabulary, or when it's accompanied by another form of communication. We cannot doubt the importance of culture and history of what they can do to effect language; however, it's also notable that both aspects are somewhat artificial, which certain fragments of truth may be misinterpreted by accident or on purpose. However, it's also possible to retain the universal understandings through other form of communication with more accuracy, thus we should digest the truthfulness of the knowledge within language, by knowing the possible uncertainties hidden beneath it. Word Count: 1598 Reference 1 Oxford English Dictionary, [http://oxforddictionaries.com/definition/vocabulary?q=vocabulary], (last accessed: January, 2012). 2 Cambridge English Dictionary, [http://dictionary.cambridge.org/dictionary/british/vocabulary?q=vocabulary], (last accessed: January, 2012). 3 BRYSON, Bill: 1990, The Mother Tongue, William Morrow & Company, Inc., July 1990, p 76. 4 L'Enciclopedia Italiana, [http://www.treccani.it/vocabolario/culaccino/], (last accessed: January 2012). 5 HARTSHORNE, Joshua, "Does Language Shape What We Think?", Scientific American, [http://www.scientificamerican.com/article.cfm?id=does-language-shape-what], (last accessed: December 2011). ...read more.