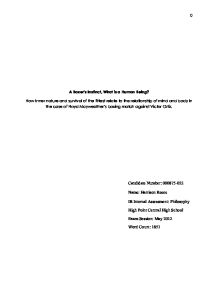 How Inner nature and survival of the fittest relate to the relationship of mind and body in the case of Floyd Mayweathers boxing match against Victor Ortiz.

A Boxer's Instinct, What is a Human Being? How Inner nature and survival of the fittest relate to the relationship of mind and body in the case of Floyd Mayweather's boxing match against Victor Ortiz. Candidate Number: 000875-022 Name: Harrison Reece IB Internal Assessment: Philosophy High Point Central High School Exam Session: May 2012 Word Count: 1851 Source Stimulus: http://straightfromthea.com/wp-content/uploads/2011/09/Victor-Ortiz-Floyd-Mayweather-2011-Getty1.jpg Victor Ortiz (left) getting knocked out by Floyd Mayweather (right). What is a human being? Who are we and how do we function? What is the relationship between mind and body? What are the instincts that we are born with, can we control our instincts, and can we actually develop instincts over our life span? The relationship between mind and body can be studied through athletes and their relationships between mind and body throughout all sports, and how under certain circumstances they have innate reactions that they cannot control and that are out of their mind's control. Examples of this are evident throughout sports as a whole, but perhaps portrayed best more so in a particular example through a boxing match between Floyd Mayweather and Victor Ortiz to become World Champion. The fight ended in a highly controversial manner, and because of its highly controversial outcome, in how Floyd Mayweather won, the bout it is widely debated if it was a fair outcome or was it unfair. ...read more.

Practically his whole life he has been boxing, and through the years he has spent and continues to spend countless hours every day at the gym. Through training, boxers especially Mayweather have developed innate reactions to certain circumstances. Everyday Floyd throws thousands of punches in the gym without hesitation and is taught to throw punches in a real fight whenever there is an opportunity to hit the opponent in a legal manner. Through this training, he develops innate reactions, or instincts as a boxer. When you train as a boxer for more hours in a day, every day, than all of the other activities you do in life put together you will inevitably develop instincts over time as only a boxer would. When Ortiz came in to hug Mayweather a second time after the separation by the referee, it was already time to begin fighting again and when he backed away, Mayweather immediately hit Ortiz because Ortiz did not put his arms up to defend himself, and it was Mayweather's innate reaction to the situation that caused him to take action. In the art of boxing one must be ready to fight at all times. Along with Mayweather's developed instinct is the innate human condition of survival of the fittest and as a human naturally when the opportunity arose he took it to become the champion, and in that he displayed survival of the fittest. ...read more.

Furthermore according to Hannah Arendt , Mayweather's actions are more than acceptable "only the best who constantly prove themselves to be the best and who "prefer immortal fame to mortal things," are really human; the others, content with whatever pleasures nature will yield them, live and die like animals." (Arendt 19) This defines Mayweather's actions, in that he is one "who prefers immortal fame to mortal things." Therefore according to Arendt, Floyd Mayweather is really a human. Arendt's philosophy portrayed here directly correlates to survival of the fittest. Mayweather's punch is a perfect example of what a human being is in survival of the fittest and in Arendt's "Human Condition." We are all human beings under the influence of today's society of the world. We all are born with innate reactions to survive and we also develop instinctual reactions over time through the development of mind and body and together they form our unique selves. In the case of Floyd Mayweather his development in the relationship between his mind and his body creates his own set of instinctual reactions as a human being. He is a human being, and as a human being he has instinctual actions, moral values, and a relationship between mind and body as one. As a human our instincts do not always reflect who we are, as in this case it did represent morals to him in that split second, but instead what took over was his human nature and survival of the fittest. ...read more.