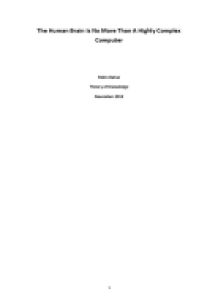 Human Brain is no more than a highly complex computer. Discuss

ï»¿The Human Brain Is No More Than A Highly Complex Computer Helen Kahur Theory of Knowledge November 2012 Introduction Over time, computers have developed and therefore proven to be faster, omnipotent and generally more able as opposed to the human brain. We think that this is true, because computers have been programmed to work faster, and calculate faster. However, little do we realize that to be able to programme a computer, you have to have the knowledge and ability to be more intelligent than a computer. Computers do not work individually; it is the human’s job to make the computer work. The more intelligent the computer appears to be, the more intelligent the human brain must be. Thus, we come to think, which one is superior - the computer or the human brain? Which one can store a larger amount of memory, which one is faster, and how much power does each need and possess? The Human Brain The natural selection has programmed the human brain to feel, make decisions, object and reject when needed, and the human brain does not work in a logical manner, whereas computers do. The human brain is unique to one’s body, no one has mental access to your brain, and no one can mentally change your ‘’mind’’, so to say. Initially, the brain is based on a reciprocal nature of comprehending emotions, creating a so-called database of memories which repetitively appear in the visional side of the brain, which we call ‘’déjà vu’’. ...read more.

The computer is able to calculate faster than most human beings because the technology has proven to be so developed, that it is faster at solving problems than the average human being. However, computers have limitations; every computer has a certain amount of memory storage, and if that is close to becoming full, the slower the machine becomes. This shows that technology has yet to evolve to gain such a capability as human beings. Machines and Examples There is no doubt that machines will become more and more mind-like over time. It is inevitable, just like the development of other technological devices is inevitable. The knowledge and skills of the human brain expands, therefore the technology expands, it is fortunately (or unfortunately) the way that the natural selection works; people evolve from people, plants evolve from plants, and sadly, computers evolve from computers. When in the end of the 20th century Kasparov surprisingly almost won an IBM computer Deep Blue, scientists and professionals were shocked. It was practically impossible. Kasparov, however, did lose two matches to Deep Blue, however overall, he gained victory over the machine. We come to wonder, how was it possible? Either the logic and intelligence of Kasparov is excessively high, or the machine wasn?t programmed to be as intelligent and logical as Kasparov. The chess competition between a World Class champion and a machine is a perfect example to show how the brain can evolve and develop by itself over time, after months, or even days. ...read more.

Computers don?t have ancestors, nor do they descend from anywhere, they simply are and have been developed by the hands of human beings. Therefore, it is wrong to say that the brain is no more than a highly complex computer. A computer can be just as intelligent as a human brain, because the human is the one that programmes the computer, the computer cannot program itself, therefore, there must be someone that has a higher and more complex intelligence than a computer. The main difference between a highly complex computer and a human brain is that a computer is able to follow a logical way of thinking, a human brain is able to do the same, however, the human brain can very often be distracted by other ideas or actions. Since the computer only knows a certain area of knowledge (what has been taught to the computer), it will only be focused on that. A Human brain may work the same way, but it is scientifically proved that an average human brain cannot be focused on something for longer than 30 minutes. In other words, the attention span of a human brain is a 100 times shorter than the attention span of a computer. A machine however, as it has been taught only certain things, it will only develop in those areas, as opposed to the human brain, which can take in a large amount of information of all areas. ...read more.