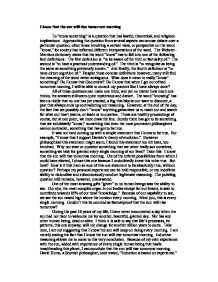 I Know that the Sun Will Rise Tomorrow Morning

I know that the sun will rise tomorrow morning To "know something" is a question that has lawful, theoretical, and religious implications. Approaching the question from several aspects can arouse debate over a particular question, often times involving a certain view, or perspective on the word "know," for society has reflected different interpretations of the word. The Webster-Merriam dictionary states that the word "know" has to fall into one of the following four definitions: The first definition is "to be aware of the truth or factuality of." The second is "to have a practical understanding of." The third is "to recognize as being the same as something previously known." And finally, the fourth definition is "to have direct cognition of." Despite these concise definitions however, many still find the meaning of the word rather ambiguous. What does it mean to really "know" something? Do I know that God exists? Do I know that when I get out of bed tomorrow morning, I will be able to consult my parents like I have always done? All of these questions can make one think, and yet no matter how much one thinks, the answers still seem quite mysterious and distant. The word "knowing" has been a riddle that no one has yet cracked, a fog that blocks our want to discover, a pest that always ends up contradicting our reasoning. ...read more.

Take note, I am not suggesting that I know the sun will keep on rising every morning. I am merely stating the fact that I know the sun will rise tomorrow morning. Inductive reasoning allows me to come to this very conclusion. Because of my own experience with the sun, added with experience of every single human being that has/is tread/treading this planet, I can conclude that the sun will rise tomorrow morning. David Hume, a Scottish philosopher, once stated, "Induction is based on experience." The most straightforward way to approach this statement would be the use of scientific evidence. Scientists have concluded that, instead of the planets and the sun rotating around the Earth (like medieval, religious philosophers had concluded), the Earth, along with all the other planets in the solar system, rotate around the Sun. The reason why we see the sun every single day can be explained by the relationship between the Sun and the Earth. Because of the Earth tilt (23.5 Degrees), the fact that the Earth rotates within itself, and the fact that the Earth, while rotating within itself, orbits the sun, the sun's rays only hit half of the Earth at once. We are, half of the day, exposed not to the suns rays, and the other half exposed to the sun's rays, which creates day, and night, inevitably. ...read more.

It probably won't happen, but it could. This is inevitable. Another slight possibility is that the media was lying to us the whole time. Sure, the media lies to us viewers all the time, whether that is through domestic complications, and/or patriotic cover-ups (we've seen this innumerable times during the course of our history). How do we "know" that we have been lied to all this time about the sun's existence? Who knows, maybe all the governments in the world came together and decided to plant a massive, ultra-beam satellite into the skies, and with one switch of a button, the light rays could be switched off just like a light bulb. Now the possibility of this being the truth is incredibly low, as many would agree, but is definitely not zero, for we civilians have never looked up there to see for ourselves if that's the ultimate truth or not. I know the sun will rise tomorrow morning. However, there are other things in life we think we know, but if thought about thoroughly, can be easily questioned. Thus it is important for us to analyze how we came to know such fundamental, but fascinating verities. Many forces that have come from our society, our experience, our instinct, have influenced us to become "knowers" of particular beliefs, or ideas. These forces can ultimately shape who we really are, and what we indisputably know. Harry O'Sullivan Theory of Knowledge ...read more.