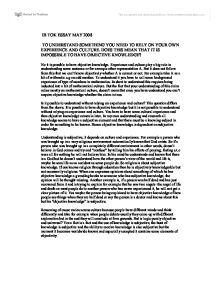 IB TOK ESSAY MAY 2008 TO UNDERSTAND SOMETHING YOU NEED TO RELY ON YOUR OWN EXPERIENCE AND CULTURE. DOES THIS MEAN THAT IT IS IMPOSSIBLE TO HAVE OBJECTIVE KNOWLEDGE? No it is possible to have objective knowledge. Experience and culture play a big role in understanding some sentence or for example other representation A. But it does not follow from this that we can't know objectively whether A is correct or not. For example take A as a bit of arithmetic e.g an odd number. To understand it you have to call some background experience of type of numbers in mathematics. In short to understand this requires being inducted into a bit of mathematical culture. But the fact that your understanding of this claim relies mostly on mathematical culture, doesn't mean that once you have understood you can't acquire objective knowledge whether the claim is true. ...read more.

So religion is about subjective knowledge. If one knows religion through education then he is objectively knowledgeable but not necessarily religious. When one expresses opinions about something of which he has objective knowledge e.g reading books to someone who has subjective knowledge, the opinion will be thought missing. Another example is, if a person was half dead and has just recovered from it and is trying to explain for example that he saw two angels: the angel of life and death as most people do to another person who has never experienced it, he will not get a clear picture of it. Yes maybe the person being explained to have objective knowledge of how people see things when they are half dead or say the person is a doctor and knows about this but his "objective knowledge" is subjective. Reasoning of cause varies across culture because people have different minds and think differently and take for example when people debate usually they come up with different explanation but in the end they will conclude at firm grounds. ...read more.

This is my stark illustration of my argument: In science (chemistry, biology and physics) there are always laws. Let me take Sir Isaac Newton's Universal Law of Gravitation and his story. When Newton was sitting under an apple tree, an apple fell on his head, and began to think the following lines: The apple is accelerated, since its velocity changes from zero as it is hanging on the tree and moves toward the ground. Thus, by Newton's second law there must be a force that acts on the apple to cause it to accelerate downwards. Newton had the initial experience of the apple falling on his head and then thought about it and came up with an idea. He modified it and came up with scientific laws and later was accepted universally as a law. He had the subjective knowledge to himself, happened independent of observers and later proved it and became an objective knowledge. The subjective view does not reject the existence of the physical world. The physical world is the best hypothesis for explaining subjective data. ...read more.