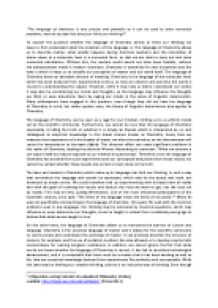 IB ToK - The Language of Chemistry - Does it direct or limit our thoughts?

﻿?The language of chemistry is very precise and powerful as it can be used to solve numerical problems, how do you feel this directs or limits our thinking?? To answer the question whether the language of Chemistry directs or limits our thinking, we have to first understand what the intention of the language is. The language of Chemistry allows us to describe matter, what exactly happens during chemical reactions and the interaction of atoms down to a molecular level in a numerical form, so that we are able to carry out and solve numerical calculations. Without this, the modern world would not have been feasible, without the advancements made in modern chemistry. Chemistry is essentials for new discoveries and the way in which it helps us to simplify our perception of matter and our world itself. The language of Chemistry bears an abundant amount of meaning. Chemistry is the language of the molecular level, which has been deduced from experimental science, so how we observe and perceive the world is crucial to understanding the subject. However, while it may help us better understand our world; it may also be constraining our minds and thoughts, as the language may influence the thoughts we think or even determine them by caging our minds in the sense of linguistic determinism. ...read more.

This may be why Ludwig Wittenstein, one of the most influential philosophers of the twentieth century, once said: ?The limits of my language mean the limits of my world.?[1] While he was not specifically commenting on the language of chemistry, this quote fits well with the common problems seen in any language. Our thinking may be narrowed by chemical equations, which may influence or even determine our thoughts, as we?re taught in school from a relatively young age to believe that what we are taught is true. On the other hand, the language of Chemistry allows us to transcend the barriers of culture and language. Chemistry is the universal language of matter and it allows for the scientific community to communicate and understand the workings of matter. It can precisely describe the structure of isomers, for example, and the use of oxidation numbers has also allowed us to develop a systematic nomenclature for naming inorganic substances. In addition, we cannot ignore the fact that while we do not know whether the language of Chemistry is correct, it has led to countless technological advancement, and it is undeniable that there must be a reason that it has been working so well so far, that our empirical knowledge deduced from experiments fits perfectly well conceptually. ...read more.