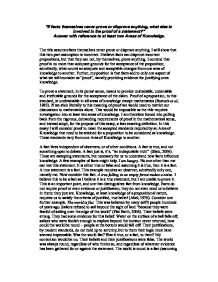 If facts themselves never prove or disprove anything, what else is involved in the proof of a statement?&quot;

"If facts themselves never prove or disprove anything, what else is involved in the proof of a statement?" Answer with reference to at least two Areas of Knowledge. The title assumes facts themselves never prove or disprove anything. I will show that this two-part assumption is incorrect. I believe facts can disprove incorrect propositions, but that they can not, by themselves, prove anything. I contend that proof is no more than adequate grounds for the acceptance of the proposition; admittedly, what counts as adequate and acceptable changes from one area of knowledge to another. Further, my position is that facts add to only one aspect of what we will consider as "proof", namely providing evidence for justifying ones knowledge. To prove a statement, in its purest sense, means to provide unshakable, undeniable and irrefutable grounds for the acceptance of the claim. Proof of a proposition, to this standard, is unobtainable in all areas of knowledge except mathematics (Bostock et al, 1982). If we stick literally to this meaning of proof we would need to restrict our discussions to mathematics alone. This would be impossible as the title requires investigation into at least two areas of knowledge. I am therefore forced into pulling back from the rigorous, demanding requirements of proof in the mathematical sense, and instead adopt, for the purpose of this essay, a less exacting definition. ...read more.

Ghosts do not exist. The reason for pointing out these examples is that "facts" can only be reliably used to investigate a statement if they are actually facts. Wrong facts do not exist, but things we think are facts, but turn out to be false certainly can exist, and have done so in the past. What can and can not be proved with facts, and if facts by themselves are inadequate, what else is involved? A fact is simply a true statement. If presented with a fact I would know no more than, "this statement is true". For example, the fact that Washington is the capital of the USA is simply a true statement. It tells me nothing other than Washington is the capital of the USA. No further knowledge can be gleaned from the fact. I do not even have to alter my beliefs based on the statement, but to do so on no evidence, save perhaps the claim of the person presenting me with the fact, is to take a tremendous leap of faith. We all know Washington is the capital of the USA, but what if I presented you with the "fact" that I share my birthday with Jill, a girl I went to school with. ...read more.

In mathematics, a new theorem is not based on a fact. I would even say that there are no facts in mathematics. Facts are always true. Mathematical statements are 100% certain, true if you wish, provided you accept the axioms. There is no such proviso for facts in other disciplines. A scientific fact does not require the pre-acceptance of gravitation. An historical fact does not require the assumption France and Prussia were at war. So, in mathematics, the 100% certainty in facts, e.g. 1+1=2, depends upon a more fundamental supposition: the acceptance, without question, of the axioms of arithmetic. If such a pre-requisite exists in all of mathematics, and all of modern mathematics is axiomatic, then how can mathematical facts exist independently of other conditions? Facts are just true; they do not require other assumptions. As such, mathematics contains no facts. In mathematics all true statements ultimately depend upon an acceptance of unprovable axioms. With the inclusion of deductive reasoning, new theorems arise from previously proved statements or from the axioms. In conclusion, knowledge is justified, true belief. Facts, which are true statements, can only help in justifying a knowledge claim; they are insufficient to establish the claim as knowledge. However, a single fact, along with a certain amount of logical reasoning, can disprove an incorrect statement. ...read more.