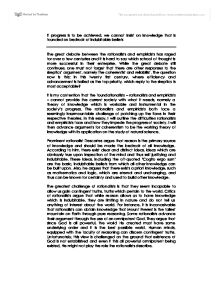 If progress is to be achieved, we cannot insist on knowledge that is founded on bedrock of indubitable beliefs

If progress is to be achieved, we cannot insist on knowledge that is founded on bedrock of indubitable beliefs The great debate between the rationalists and empiricists has raged for over a few centuries and it is hard to say which school of thought is more successful in their enterprise. While the great debate still continues, one must not forget that there are other responses to the skeptics' argument, namely the coherentist and reliabilist. The question now is this: in this twenty first century, where efficiency and advancement is hailed as the top priority, which reply to the skeptics is most acceptable? It is my contention that the foundationalists - rationalists and empiricists - cannot provide the current society with what it needs, namely a theory of knowledge which is workable and instrumental in the society's progress. The rationalists and empiricists both face a seemingly insurmountable challenge of patching up the flaws in their respective theories. In this essay, I will outline the difficulties rationalists and empiricists face and how they impede the progress of society. I will then advance arguments for coherentism to be the working theory of knowledge with its application on the study of natural science. ...read more.

The faculty of cognition will make a copy of this red, round sense experience in the memory, forming the idea of 'red circle' such that he will recognize it when he next encounters it. Empiricists claim that this idea or concept formation is how we acquire knowledge. Empiricists pride themselves with the indubitability of sense data. According to them, sense experience is indubitable. One cannot doubt the slightest that one is having the sense experience of looking at a piece of paper with words on it. It could be that an evil genius was deceiving him or a computer stimulating his brain, feeding him the sensation, or it could be a dream (as Descartes presented in his Meditation), but the very fact that one having this paper-like sensation is indubitable. However, many critics argue that while sense experience is indubitable, it remains as a bundle of perceptions until one interprets and categorizes it meaningfully. But if one attempts to interpret and categorize it, then one faces the possibility of error and thus uncertainty. Therefore, while sense experience provides knowledge of the world, there cannot be absolute certainty. From the above illustrations, it is obvious that neither empiricists nor rationalists are able to provide a theory of knowledge which can satisfactorily provide us a mean of acquiring knowledge of the world, contingent truths, with certainty. ...read more.

All beliefs are subjected to revision though those beliefs which are located at the side of the web will be revised more easily than those at the center of the web. For instance, Newton's law of gravity is a belief which is well justified by many of the beliefs in this established web and those located near the center. In order to revise it, there must be a great amount of evidence which will overwrites those justifying beliefs. It is the overwhelming evidence of the Relativity Theory that Newton's law of gravity is revised and removed. In conclusion, progress cannot be made if we insist that knowledge be based on bedrock of indubitable belief. The field of mathematics, which is based on a set of axioms from which all other theorems can be proven, is a good illustration of a field of knowledge which can be formed from foundationalists' principles. It is eternal and unchanging and certain. However, for progress to be achieved, we cannot rely solely on mathematical knowledge. Social and natural sciences are founded on the principles of coherentism, where beliefs can be revised. Even the strongest belief can be revised if there are sufficient beliefs to do so. Therefore, it is my contention that if progress is to be achieved, we cannot insist on knowledge that is founded on bedrock of indubitable beliefs. ...read more.