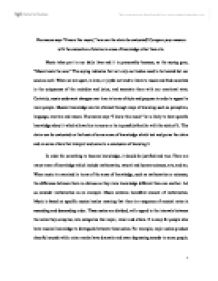 If someone says I know this music, how can the claim be evaluated? Compare your answers with the evaluation of claims in areas of knowledge other than arts.

If someone says “I know this music,” how can the claim be evaluated? Compare your answers with the evaluation of claims in areas of knowledge other than arts.

Music takes part in our daily lives and it is presumably because, as the saying goes, “Music heals the soul.” The saying indicates that not only our bodies need to be healed but our souls as well. When we are upset, in love, or joyful we tend to listen to music and find ourselves in the uniqueness of the melodies and lyrics, and associate them with our emotional state. Certainly, music underwent changes over time in terms of style and purpose in order to appeal to more people. Musical knowledge can be attained through ways of knowing such as perception, language, emotion and reason. If someone says “I know this music” he is likely to have specific knowledge about it which allows him to say so or he is possibly familiar with the style of it. This claim can be evaluated on the basis of some areas of knowledge which test and prove the claim and on some others that interpret and come to a conclusion of knowing it.

In order for something to become knowledge, it should be justified and true. There are many areas of knowledge which include mathematics, natural and human sciences, arts, and etc. When music is examined in terms of the areas of knowledge, such as mathematics or sciences, the difference between them is obvious as they view knowledge different than one another. Let us consider mathematics as an example. Music contains incredible amount of mathematics. Music is based on specific musical scales meaning that there is a sequence of musical notes in ascending and descending order. These scales are divided, with regard to the intervals between the notes they comprise, into categories like major, minor and others. It is easy for people who have musical knowledge to distinguish between these scales. For example, major scales produce cheerful sounds while minor scales have dramatic and even depressing sounds to some people. Mathematics in music is not limited with musical scales only. Other concepts like Golden ratio and Fibonacci sequence can also be encountered in music, especially by Classical era musicians. Furthermore, musical set theory uses some of the concepts of mathematical set theory to organize musical objects and describe their relationships. For instance, musicians use the term transposition, which is changing the musical scale from one to another where mathematicians use translation when they change the location of an object. Therefore when somebody says “I know this music,” it means that this person has an understanding of significant musical concepts like musical scales, which allows him to perceive the familiarity of the music through his four ways of knowing and claim that the music has major scale as an instance.

Mathematics is a universal language whose concepts are accepted throughout the world. Having in mind that music is highly based on mathematics we can say music is universal as well. However there is a big and crucial distinction between these universalities, although sheet music is same everywhere in the world. The distinction is what kinds of emotions music evokes in different people. There can be no universality in the emotions called forth by music. A person can only know the mathematical interpretation of a musical piece, but not the emotion it evokes. A musical piece, for instance, may evoke grief in some people, while the very same piece may raise nothing in others. Another example is that major scales are considered to be more cheerful than minor scales; however this again depends on a person’s emotions and it may be just the opposite. Language is another important factor in the acquisition of knowledge in music. Lyrics of the musical pieces make them unique. People tend to memorize the lyrics of their favorite songs and when they hear a part of the lyrics they may immediately recognize the musical piece. Even reading the lyrics of a song may give the idea of being familiar with the music. Thus, there is no need for a mathematical interpretation of the music to be able to state, “I know this music.”

Knowledge claims are evaluated distinctly in different areas of knowledge. Scientists try to attain knowledge through the scientific method, unlike mathematicians. In this method, scientists begin with finding a phenomenon of interest that produces questions. A scientist then chooses a question of interest, and based on previous knowledge, builds a hypothesis. The scientist then designs a controlled experiment which will permit him to test the hypothesis against the real world. He then makes predictions about the outcome of the test, based upon the hypothesis. At this point, the scientist performs the experiment and makes comparison of his predictions with his observations. Presuming that there were no errors in the experiment, thus if they match, this becomes an evidence in favor of the hypothesis. This hypothesis then can be distributed to other scientists, who would test it, and if it works for them as well it may turn into a scientific theory. Scientific theories are highly considered as knowledge, although there is always a possibility for them for further revision. Thus, in order to acquire knowledge from science subjects, knowledge claims should be tested, proved and can be repeated and checked independently by others. Therefore, when we are asked to evaluate a knowledge claim in music we will first have a hypothesis; make predictions about the outcome of the experiment based on the hypothesis, and when there is no error we will let others to make the same experiment under the same conditions. If the results are the same, that means acquire knowledge through the scientific method. While this process, we again need ways of knowing to be able to comment on the claim. For example, let us say our hypothesis is “This music piece is flamenco because it contains a lot of classical guitar playing with the golpe technique and has Phrygian cadence.” Then we compare it to flamenco music pieces which contain guitar playing and the same chord progression. Then we conclude that the music is flamenco and if other observers also agree with us it becomes knowledge. Therefore, in sciences, when somebody says “I know this music” he relies on scientific method and with the help of four ways of knowing, he concludes that he has knowledge on the music piece.

Likewise, as it was in the case of mathematics, while acquiring knowledge in sciences we are subjected to uncertainties and disagreements. First of all, all humans are unique individuals and not every single person would agree on the same claim, but rather on their opinion on the issue. The scientific method, which is used to acquire knowledge in sciences, can be problematic too. As it was mentioned above, while carrying out the experiment we compare our predictions with our observations. If they do not match, i.e. if there are errors in the experiment, and then the hypothesis is falsified. Additionally, even when a hypothesis becomes a scientific theory it is always subjected to further revision or review for further development. Recalling from the previous example, not everybody would agree on the music piece being flamenco for containing classical guitar playing. There are many songs from different genres, such popular music or classical music, which involves classical guitar playing. Moreover, there are many chord progressions in flamenco music and the very same which is aforementioned is used in different genres as well. Therefore, it would be very hard to use the scientific method to carry out to evaluate knowledge claims in music. Consequently, evaluating knowledge claims in areas of knowledge, such as science, is hard to a significant extent since it is very difficult to come to an agreement on a scientific theory. Scientific theories are widely regarded as knowledge and those being problematic would not allow us to evaluate knowledge claims in music in terms of scientific theories.