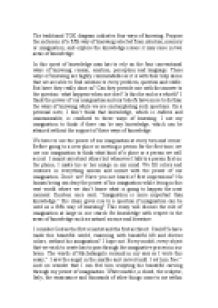 Imagination as a Fifth Way of Knowing.

﻿The traditional TOK diagram indicates four ways of knowing. Propose the inclusion of a fifth way of knowing selected from intuition, memory or imagination, and explore the knowledge issues it may raise in two areas of knowledge. In this quest of knowledge man has to rely on the four conventional ways of knowing: reason, emotion, perception and language. These ways of knowing are highly commendable as it is with their help alone that we are able to find solution to every problem, question and riddle. But have they really done so? Can they provide one with the answer to the question: what happens when one dies? Is this the end or a rebirth? I think the power of our imagination and our beliefs have more to do than the ways of knowing while we are contemplating such questions. On a personal note, I don?t think that knowledge, which is endless and immeasurable, is confined to these ways of knowing. I use my imagination to think if there can be any knowledge, which can be attained without the support of these ways of knowledge. We have to use the power of our imagination at every turn and corner. Before going to a new place or meeting a person for the first time, we use our imagination to think what kind of a place or a person we will accost. ...read more.

Known as God particle or the Higgs Boson, this particle is the last missing link to ?the Standard Model that has honed our knowledge to understanding the basic building blocks of the universe.? Is it not with the power of their imagination that the scientists made a movement in the scientific world that had long turned stagnant since the theory of Big Bang? According to me unless a scientist imagines, he has nothing waiting for him but the dead end. And this imaginative power embellished by his memory and experience is the major factor that paves our way to the quest of knowledge. I do not intend to say that reason and perception did not play any role in the discovery of the God particle, but what I insist is that the role of imagination in this revolutionary discovery is indubitable. Had there been no imagination of ?The Higgs field, a theoretical and invisible energy field that pervades the whole cosmos,? there would be no knowledge of it. ?Imagination rules the world? when it comes to art and literature. Let me remind you of the famous novel,? Hard Times? written by Charles Dickens. The novel is exemplary in that it shows the plight of the children of a schoolmaster who bereaves his children of imagining things, and forces them to study facts and only facts. The result is self-evident: Louisa becomes a derelict woman while Tom dies a criminal. ...read more.

And I think the same applies to everyone. Isaac Newton must have imagined the reason behind the fall of the apple before postulating the law of gravity. I have discussed the proposition that imagination can be considered a fifth way of knowing. Does it give us knowledge? Yes it does. It creates new colors new shapes and new venues before us. But one must not forget that the world of imagination is the polar opposite of the real world. In my childhood days I wanted to be bitten by spiders in order that I too become a Spiderman. And if it were not my reason and perception, I would have me bitten by them. Today I still think of the conundrum: if I may have a rebirth or this life will be the end of everything. But I don?t get any answers. I explore different possibilities but I think that I am searching for a needle head in a haystack. Imagination does not necessarily give us knowledge. I am waiting for the 21st of December waiting for what will happen according to the Mayan prediction. I imagine binary opposite things, and make plans if I survive this doomsday. But I cannot find any answers through the power of imagination, as sometimes we believe what we see only. To conclude I think that imagination as a fifth way of knowing can be highly conducive to our knowledge provided it runs hand in hand with the other conventional ways of knowing. ...read more.