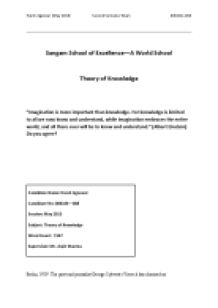 ﻿Harsh Agarwal (May 2013) Second Semester Exam 006166--008 ________________ Sangam School of Excellence?A World School Theory of Knowledge ?Imagination is more important than knowledge. For knowledge is limited to all we now know and understand, while imagination embraces the entire world, and all there ever will be to know and understand.? (Albert Einstein) Do you agree? Candidate Name: Harsh Agarwal Candidate No: 006166?008 Session: May 2013 Subject: Theory of Knowledge Word Count: 1547 Supervisor: Mr. Arpit Sharma Berlin, 1929. The poet and journalist George Sylvester Viereck has charmed an interview out of an initially reluctant superstar physicist[1] . He asks: "How do you account for your discoveries? Through intuition or inspiration?"Albert Einstein replies: "Both. I sometimes feel I am right, but do not know it. When two expeditions of scientists went to test my theory I was convinced they would confirm my theory. I wasn't surprised when the results confirmed my intuition, but I would have been surprised had I been wrong. I'm enough of an artist to draw freely on my imagination, which I think is more important than knowledge. Knowledge is limited. Imagination encircles the world." Knowledge versus Imagination. Common-sense is more helpful in daily life than daydreaming because that sharpens you as a personality and assists you to make most out of the daily ...read more.

It is never prescribed that one has to gain knowledge from certain resources. People do acquire knowledge from various senses, sense of feeling, sense of belonging, sense of humour, sense of love, loneliness, sense of affection, by meeting different people, reading different behaviours, listening to different people, observing things going around and above all knowing yourself. Now it depends upon us that how we put the knowledge inside our brains. As it is being said by Buddha that, ?Peace comes from within, do not seek it without?. So I feel same is the case here with knowledge and imagination. Knowledge comes from within, do not seek it without. If knowledge will come then automatically a person would reach to a stage, where he enters into the world of imagination. So from this it can be concluded that imagination is followed by knowledge. When the baby reaches to a stage, where he starts looking into the play-way books, starts walking on his knees, starts uttering the words out then he learns and gains knowledge. That knowledge is of course not the whole but partial one. But that partial knowledge builds the further occurrences. There comes a stage when the child joins school, meet poles apart people, see the world, take the outcomes of life into a distinguishable way. ...read more.