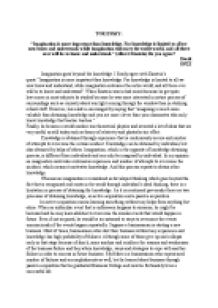 Following the example of businessman previously used to describe active acquisition. Businessmen who have learned and studied in Business College or from some professional business texts are much more likely to success in business than the businessmen who neither studied nor have professional knowledge about the business because they basically have more knowledge. If there is an exception that newbie businessman success, it is certainly because of luck or support from other business. So, eventually, the acquiring of knowledge is limited. It is impossible to acquire knowledge unless some kind of unforeseen event occurs or repeatedly occurs or some factors help to acquire knowledge. Unlike knowledge, imagination doesn?t have any limitation. Imagination accounts any thinking even though they are unrealistic, but, moreover, things created as results of ceaseless study and desperate effort made from imagination are so much valuable that they cannot be compared with such things as knowledge that created from active and passive acquisition. We are living in World full of imagination. The devices or things we use very constantly and readily are mostly invented and upgraded by certain people?s imagination, people such as Albert Einstein, Steve Jobs, Wright brothers and etc. ...read more.

So, conclusion can be drawn that Imagination is more important than knowledge. Imagination is free whereas knowledge is quite limited. Before obtaining new knowledge, there is imagination carrying on to get that knowledge from an original knowledge and the original knowledge also from imagination. It is imagination that makes able individuals to draw their dreams clearly by eliminating fear, anxiety and uncertainty about the things that will be done in the future. In contrary, if planning something in future only supporting from the acquired knowledge, individuals may give up early or some even cannot challenge because they would be restricted inside of fears and uncertainties caused from considering every single factors that may affect the plan. In perspective of this, I believe imagination is similar to braveness. Individuals who plan and challenge in order to achieve their dreams they imagined should be considered, treated, and respected as truly brave people. Furthermore, because of the achievements those brave men accomplished, today, we are enjoying more convenient life and because some individuals are still out there imagining better things, we would live a much developed and convenient life in future. Therefore, we should explore our limited ideas and knowledge through imagination in order to find out some brilliant ideas and broaden our knowledge that would bring us benefits. ...read more.