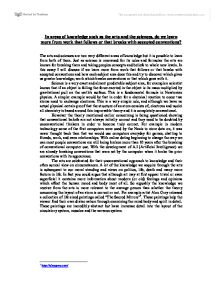 In areas of knowledge such as the arts and the sciences, do we learn more from work that follows or that breaks with accepted conventions?

In areas of knowledge such as the arts and the sciences, do we learn more from work that follows or that breaks with accepted conventions? The arts and sciences are two very different areas of knowledge but it is possible to learn from both of them. Just as science is renowned for its rules and formulas the arts are known for breaking them and taking peoples concepts and beliefs to whole new levels. In this essay I will discuss if we learn more from work that follows or that breaks with accepted conventions and how each subject area does this and try to discover which gives us greater knowledge; work which breaks conventions or that which goes with it. Science is a very exact and almost predictable subject area, for example a scientist knows that if an object is falling the force exerted in the object is its mass multiplied by gravitational pull on the earth's surface. This is a fundamental formula in Newtonian physics. A simpler example would be that in order for a chemical reaction to occur two atoms need to exchange electrons. This is a very simple rule, and although we have no actual physical certain proof that the structure of an atom consists of; electrons and nuclei all chemistry is based around this improvable theory and it is completely conventional. ...read more.

Breckinridge Haggerty, the band's live lighting and video designer, explains that the resulting dark spaces on stage "are ... for Maynard (singer). A lot of the songs are a personal journey for him ... and he feels more comfortable in the shadows." 21 This is extremely odd for a performing artist as conventionally singers tend to take the stage and be the center of the show. The big screens are used to play back "looped clips that aren't tracked to a song like a music video. The band has never used any sort of time code. They've always made sure the video can change on-the-fly, in a way that can be improvised. ... The show is never the same twice." Which again is original in live entertainment as usually producers and directors tend to keep things the same to avoid technical mishaps? We don't necessarily learn anything from this but it can spur thought and inspire other artists to do the same with their shows. Commonly in music conventions are broken for example jazz music is well known for this. But if musicians just blindly broke convention without paying attention to key signatures and timing then we would end up with an un-listenable mess hence we have to learn rules before we can break them. ...read more.

Although having said this there is a slight contradiction in what I am saying because like I was saying earlier because science is logical in nature the very fact that it is based on theories that cannot actually be proven, is completely illogical. But the other way of looking at this argument would be that science may not necessarily be about learning but is indeed about developing, in order to expand as there is no proof in science only evidence. In conclusion I believe that in order to answer the question: "In areas of knowledge such as the arts and the sciences, do we learn more from work that follows or that breaks with accepted conventions?" we must first ask ourselves if we believe in breaking conventions because although I personally believe that we learn more from the unconventional as it is more often than not completely new and original, which gives us more to learn about compared to conventional ways as they tend to have already been explored leaving less "fresh" or "untouched" knowledge to be had. However I also believe that without conventions we cannot gain "new" or original knowledge because as I said earlier on this essay the unconventional spawns from the conventional. ...read more.