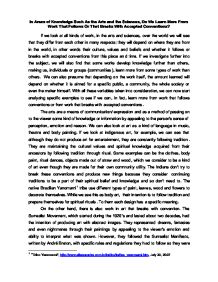 In Areas of Knowledge Such As the Arts and the Sciences, Do We Learn More From Work That Follows Or That Breaks With Accepted Conventions?

In Areas of Knowledge Such As the Arts and the Sciences, Do We Learn More From Work That Follows Or That Breaks With Accepted Conventions? If we look at all kinds of work, in the arts and sciences, over the world we will see that they differ from each other in many respects: they will depend on where they are from in the world, in other words their culture, values and beliefs and whether it follows or breaks with accepted conventions from this place and time. If we investigate further into the subject, we will also find that some works develop knowledge further than others, making us, individuals or groups (communities), learn more from some types of work than others. We can also presume that depending on the work itself, the amount learned will depend on whether it is aimed for a specific public, a community, the whole society or even the maker himself. With all these variables taken into consideration, we can now start analyzing specific examples to see if we can, in fact, learn more from work that follows conventions or from work that breaks with accepted conventions. The arts are a means of communication/ expression and as a method of passing on to the viewer some kind of knowledge or information by appealing to the person's sense of perception, emotion and reason. ...read more.

The whole society was also able to learn from it. In the sciences, we have learned both from work that followed convention and which broke with convention. Scientific knowledge is developed and uses evidence to explain the world and the universe the most accurate way possible. In atomic science, for example, at the start of the 19th Century the theories were developed by following conventions based on Aristotle's idea of atoms and Dalton's refinement of this basic idea. Scientists were able to make discoveries about the particles in the atom, their location and charge using new experimental evidence. These scientists followed what is termed by Kuhn as 'normal science', i.e. developing was already known and considered to be true within scientific theories and experiments. JJ Thompson, who investigated electrons produced experiments with electrically charged plates and magnets in a cathode-ray tube and he saw the deflection of certain particles which he said were "bodies much smaller than atoms". Later on, by doing further calculations he discovered these particles had a very large value for the charge to mass ratio and said that atoms were a sphere of positive matter in which electrons were positioned by electrostatic forces3. Following J.J. Thompson, Ernest Rutherford said that the atom had a central positive nucleus surrounded by negative orbiting electrons. ...read more.