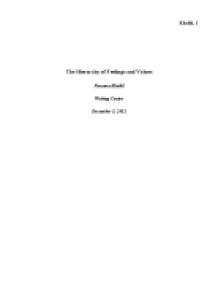 In Bernard Lonergans book, the Method in Theology, the importance of various factors that go into penetrating the Human Good is addressed.

﻿Khalid, 1 The Hierarchy of Feelings and Values Farzana Khalid Writing Center December 5, 2012 Khalid, 2 In Bernard Lonergan?s book, the Method in Theology, the importance of various factors that go into penetrating the Human Good is addressed. In chapter two, he talks about how the different facets and experiences of humanity, such as their Skills, Feelings, Values, Beliefs, Cooperation, Progress, and Decline all constitute in entering the Human Good. Skills, which is the first component of the human good, is described as the concept of adaptation which is separated into two parts called assimilation and adjustment. These two types explain how skills are acquired and utilized towards a new object or situation. Assimilation is the process of recalling what you have learned and experienced from previous situations. Adjustment is the ability to go through trial and error while slowly reforming and gaining previously learned actions. After Skills are constituted into the human good, the development of Feelings comes into play. Feelings are developed by non-intentional states and goals. ...read more.

Vital values are described by ones elementary health, strength and grace. They dominate ones growth of physical development throughout life. Depression, anguish, self-condemnation and immorality portray the existence of vital values. In book III chapter 1, Augustine talks about how he was interested in becoming physically attractive and envisioned himself being a fashion icon. He reminisces about his days in Carthage and how he felt foul and insecure about his state of being. He states, ?I was starved inside me for inner food (for you yourself, my God), yet this starvation did not make me hungry. I had no desire for the food that is incorruptible, and this was not because I was filled with it; no, the emptier I was, the more my stomach turned against it. And for this reason my soul was in poor health;? (Conf. III. 1). Augustine definitely voiced that he had poor health due to his devoid of God spiritually, and his obsession with his physical appearance over God made him feel bad. ...read more.

In Book IV chapter 8, Augustine expresses his grief about his friend?s death which leaves him having sorrow beside him every day. He describes seeing sadness in everything he comes upon. His friends allowed him to go beyond his grief and self-transcend into looking beyond what he has. Lonergan explains religious value as the heart of the meaning and the value of a man?s world. One must look at the totality of wisdom and what it means in ones living. In Book III chapter 4, Augustine comes upon Cicero?s book called Hortensius, which changed his feelings and prayers towards God. This book gave him a different outlook on life and altered his ambitions and desires. Everything else in Augustine?s life including his social status and cultural values became vain to him. He believed in wisdom being eternal and is inflamed with passionate zeal to love, seek, and obtain wisdom in itself. It is evident in Augustine?s life that religious value ranked the most important over the other elements and that ultimately he finds happiness here. ...read more.