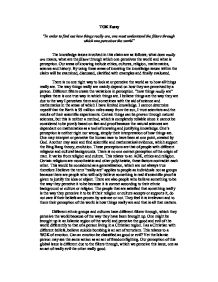 &quot;In order to find out how things really are, one must understand the filters through which one perceives the world&quot;

“In order to find out how things really are, one must understand the filters through which one perceives the world”

The knowledge issues involved in this claim are as follows; what does really are means, what are the filters through which one perceives the world and what is perception. Our areas of knowing include ethics, cultures, religion, mathematics, science and history. By using these areas of knowing the knowledge issues within the claim will be examined, discussed, clarified with examples and finally evaluated.

There is no one right way to look at or perceive the world as to how all things really are. The way things really are mainly depend on how they are perceived by a person. Different filters create the variations in perception. “how things really are” implies there is one true way in which things are. I believe things are the way they are due to the way I perceives them and sometimes with the aid of science and mathematics in the areas of which I have limited knowledge. I cannot determine myself that the Earth is 93 million miles away from the sun, I trust scientists and the results of their scientific experiments. Certain things can be proven through natural sciences, but this is neither a method, which is completely reliable since it cannot be considered to be purely based on fact and proof because the natural sciences are dependant on mathematics as a tool of knowing and justifying knowledge. One’s perception is neither right nor wrong, simply their interpretation of how things are. One may interpret or perceive the human race to have been at one point, created by God. Another may seek and find scientific and mathematical evidence, which support the Bing Bang theory, evolution. These perceptions are that of people with different religious and cultural backgrounds. There is no one correct perception of the origin of man. It varies from religion and culture. This relates to an AOK, ethics and religion. Certain religions are monotheistic and other polytheistic, these factors contradict each other. This would be considered as a generalization, which are not always true therefore I believe the term “really are” applies to people as individuals not as groups because there are people who will only believe something is real if scientific proof is given to justify the idea or object. There are also people who believe something to be the way they perceive it to be because it is correct according to their ethnic background or culture or religion. The people that are satisfied that something really is the way they perceive it to be if their religion or culture accepts or supports it, do not care if their beliefs are proven by science or not. They feel it is irrelevant and to them their perception of the world is how things really are and that is all that matters.

Different ethnic groups and cultures have different filters through, which they perceive the world because of the way they have been brought up. One might be brought up in an Islamic region of the world and perceive the good and evil of the world differently to that of a person living in a Christian region. I as a Christian with different beliefs, believe suicide bombing is an act of terrorism. This relates to a WOK of emotion. Can an emotion be classified as good or evil? Yet the Islamic person may see the same action as an act of freedom fighting. Our perception of this global issue is different due to the filters through, which we perceive this issue, one as an act of really evil the other really good.

The filters through which one perceives the world only separates out or excludes things, not include other or new things, which effect one’s perception. By using the world filter implies that ideas can only be withdrawn from the perception one has not added. This is a significant or key element of this claim, which must be considered before being able to fully understand it. The filters through which one perceives the world can be media. Media is associated with an AOK being to what extent of liberty or limitation should they have. Do knowers have a moral responsibility to examine their own perceptual filters? Media and what it presents is created by man therefore will always contain an influence; consequently it is impossible to reach complete objectivity. One must consider the position from which news is presented. Media can filter out authentic information that allows or enables an understanding of the world to be made. I recently had a media filter, which filtered out important information to me about the general elections in Sweden. Also the progress of the political stages in the presidential elections in France this year was covered and presented in depth by media in several European countries. The British Broadcasting Company covered very little for a reason I believe to be, deep-rooted dislike. This media company has created a filter through which millions of English people perceive the world due to a clash between cultures. It was not that the election had little significance to England as a country or that the issue was not relevant enough to the English population. It actually was in my opinion for they are neighbouring countries and both part of the E.U. France is one of the much beneficial countries to the E.U. The filter did not completely discard or hide the fact that the French public are electing a new president, which is something that will affect not only countries in Europe but also the world, but limited the amount of information people receive to be able to build an understanding of how things really are in the world themselves.

The issue of Nazism and their beliefs can be considered as an example of the effects filters, which are created by the culture they live in, have on people. Many Nazis in Germanic countries believed the ethnic cleansing of Jews was their responsibility to God. People growing up and living in a culture where Nazism is exercised and strongly believed were likely to develop filters in their line of perception, which separate out innocence of Jews. Someone, who is not influence by Nazism and does not believe in their cause do not obtain the same filters through, which they perceive the global issue of Nazism. The person will most likely sympathies with the Jews and hinder the Nazis from achieving their goal, confronting them. Gaining further knowledge of the ethnic groups and cultures’ history help to obtain an understanding and justify their filters. Revising the history and founding of the Nazi culture enables an extended understanding or knowledge of the filters through, which they perceive how the human race should be.

Perception is a process of selecting, obtaining, interpreting and organizing information.  Great boundary and WOK is language. Very little can be perceived if the language is not understood. Perception is active or constantly conscious. The same perception can be shared within the same ethnic group or culture but not necessarily by everyone. Perception should not be considered a valid source because it is merely based on personal opinion. Our areas of knowledge such as mathematics and science can help justify the reasoning behind our perceptions. Usually being part of the same ethnic group, culture or religion means you share the same perception of how things really are in the world. Usually someone with a certain perception can understand and respect someone else with a different perception of the same idea or thing.

The surrounding in which a person is brought up and live in has a distinct effect on their filters through which they perceive the world. One must question the reasoning and understand the filters through which, they perceive the world before they acquire the knowledge as to how things really are. Our interpretation and perception of how the human race originated exists due to our filters created by our religious and cultural backgrounds. The different ways we perceive good and evil regarding terrorism. Media is a strong filter, which can limit your knowledge greatly. Culture and tradition generates filters, which can lead to the death of millions, views on the issue of Nazism. Personal experience has an undeniable effect on the alteration made to or destruction of one’s filters, consequently leading to a change in perception. There is no one right way through which one can perceive how things really are. Perception varies mainly from culture religion and less significantly within the same cultures or religion. The filters through, which we perceive the world limit our knowledge and understanding, not expand it. The claim does not give a general form of advice; it only aids one person to determine their own personal views, perception and also interpretation of the world and world issues. The claim applies solely to individuals separately not groups simultaneously.