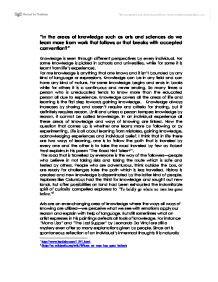 In the areas of knowledge such as arts and sciences do we learn more from work that follows or that breaks with accepted convention?

"In the areas of knowledge such as arts and sciences do we learn more from work that follows or that breaks with accepted convention?" Knowledge is seen through different perspectives by every individual. For some knowledge is picked in schools and universities, while for some it is learnt from life's experiences. For me knowledge is anything that one knows and it isn't bounded by any kind of language or expressions. Knowledge can be in any field and can have any kind of nature. For some knowledge begins and ends in books while for others it is a continuous and never ending. So many times a person who is uneducated tends to know more than the educated person all due to experience. Knowledge covers all the areas of life and learning is the first step towards gaining knowledge. Knowledge always increases by sharing and doesn't require any criteria for sharing, but it definitely requires reason. Until and unless a person tempers knowledge by reason, it cannot be called knowledge. In an individual experience all these areas of knowledge and ways of knowing are linked. Now the question that comes up is whether one learns more by following or by experimenting. ...read more.

Writers are always in the quest for something new and every era in the history of literature is characterized by something new. When Shakespeare created bold women characters in his plays, he was reprimanded by the censoring authority as well as the Queen but his characters lay the path for the feminist literature that followed centuries later. One of the most revolutionary movements in literature was the Absurdist movement in drama where all existing theatrical traditions were shattered to bits. There were no conventional sets or dialogue. In fact they even did away with the accepted form of drama as their plays had no beginning, middle, or end. Though the language of the plays defied logic yet they were perceived easily by the audience as everyone identified with the emotions expressed. This artistic tradition that broke away from all artistic norms added to common man's knowledge, about the anger and frustration against the post world war set-up, as no amount of traditional drama could. This was also a fore-runner to the stream of consciousness movement that followed. Writers like Virginia Woolf experimented with a style of writing where the novel is written as direct thoughts of the writer and hence follows no chronology. ...read more.

He came up with the shocking theory of the pleasure principle, reality principle and Oedipus complex. The latter was explined in terms of two poles-the negative pole which results in hatred for the parent of the same sex and the positive pole which makes a child have a latent sexual feeling for the parent of the opposite sex. This theory of psychological incest was supported by C. G. Jung and shocked the masses. Freud was labelled as a rebel thinker but the facts given by him have added to te body of existing knowledge of psychology, so much so that the entire psychological criticism of literature is based on it. Oedipus Rex and hamlet were understood much better through the Freudian concepts. Therefore one can conclude that the run of the mill theories and trends can only explain what we already know over and over again but can not add anything worthwhile to human knowledge. On the other hand thoughts that break the barrier of prescribed limits are the ones that benefit mankind. Going with the flow does not challenge the mind; it was designed to swim against the tide. As John A. Shedd said "A ship is safe in its harbor but that is not what ships are built for"4 1 http://www.bartleby.com/119/1.html 2 (http://en.wikipedia.org/wiki/Where_no_man_has_gone_before) 3 http://thinkexist.com/quotation/you_see_things-and_you_say--why-but_i_dream/13471.html 4 http://www.speakersolutions.com.au/notable-quotes.asp ?? ?? ?? ?? ...read more.