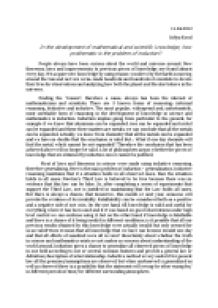 In the development of mathematical and scientific knowledge, how problematic is the problem of induction?

﻿11.04.2012 Sofiya Koval In the development of mathematical and scientific knowledge, how problematic is the problem of induction? People always have been curious about the world and universe around. New theorems, laws and improvements to previous pieces of knowledge are found almost every day. We acquire new knowledge by using reason: wonder why the Earth is moving around the Sun and not vice versa, made hundreds and hundreds of scientists to devote their lives for observations and analyzing how both the planet and the star behave in the universe. Finding the ?reason?, therefore a cause, always has been the interest of mathematicians and scientists. There are 3 known forms of reasoning: informal reasoning, deductive and inductive. The most popular, widespread and, unfortunately, most unreliable form of reasoning in the development of knowledge in science and mathematics is induction. Induction implies going from particular to the general, for example if we know that aluminum can be expanded, iron can be expanded and nickel can be expanded and these three matters are metals, we can conclude that all the metals can be expanded. ...read more.

But there is always a chance, that tomorrow, this month or next year, someone will provide the evidence of its invalidity. Falsifiability can be considered both as a positive and a negative side of one coin. On the one hand, till knowledge is valid and useful for everything where it has been used and if it was based on good observations under high level control we can continue using it, but on the other hand, if knowledge is falsifiable and there is a chance of it being invalid in different conditions, is it possible that all our previous results obtained by this knowledge were actually invalid but only seemed for us as valid? Does it mean that all knowledge that we have can become invalid one day and that all efforts of mankind were all in vain? Uncertainty about whether the truth in science and mathematics exists or not makes us concern about understanding of the world around. ...read more.

for which theory didn?t work, but no one was able to formulate a general law, that will prove that this theorem is working for every number from range of infinity. For Andrew it took ages to prove and to find this general law. According to Karl Popper?s theory ?human knowledge in general, is irreducibly conjectural or hypothetical, and is generated by the creative imagination in order to solve problems that have arisen in specific historico-cultural settings? (http://en.wikipedia.org/wiki/Karl_Popper, 23.04.2012). The mentioned-above statement gives us an example of critical way of thinking: from this point of view, all pieces of knowledge, which are mostly achieved by induction reasoning, in sciences and mathematics have no sense. In conclusion I would like to point out that nevertheless without inductive reasoning most of the ?ocean? of knowledge we have about the universe around us and our behavior will not exist, we shouldn?t rely with no doubts on these knowledge and always do best to prove, make improvements to it and try to justify our conjectures to understand the world around more precisely. ...read more.