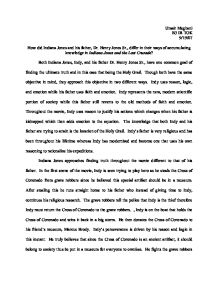 Umair Meghani B3 IB TOK 9/19/07 How did Indiana Jones and his father, Dr. Henry Jones Sr., differ in their ways of accumulating knowledge in Indiana Jones and the Last Crusade? Both Indiana Jones, Indy, and his father Dr. Henry Jones Sr., have one common goal of finding the ultimate truth and in this case that being the Holy Grail. Though both have the same objective in mind, they approach this objective in two different ways. Indy uses reason, logic, and emotion while his father uses faith and emotion. Indy represents the new, modern scientific portion of society while this father still reverts to the old methods of faith and emotion. Throughout the movie, Indy uses reason to justify his actions which changes when his father is kidnapped which then adds emotion to the equation. The knowledge that both Indy and his father are trying to attain is the location of the Holy Grail. Indy's father is very religious and has been throughout his lifetime whereas Indy has modernized and become one that uses his own reasoning to rationalize his expeditions. ...read more.

Later on in the book, Indiana Jones is told his father disappeared therefore his emotion forces him to go on a quest to find his father. His emotion coupled with logic and reason leads him to his father's location. Indy's logic is shown as he reads his father's diary which helps Indy guide himself to his father. His emotion is clearly illuminated when he invades the Nazi rally to capture his father instead of devising a plan that would provide more safety for both he and his father. Towards the very end of the movie, Indiana Jones must combine faith and emotion to save his father. This is exhibited when Walter Donovan shoots his father, therefore forcing Indy to retrieve the Holy Grail in order to save his father. Once of the obstacles that Indy must overcome in order to reach the Holy Grail is walking on an invisible bridge, which tests his faith. After he saves his father, Indy again shows his reason and logic as instead of reaching for the Holy Grail and risking his own life, he lets the Holy Grail go and saves himself along with his father and Marcus Brody. ...read more.