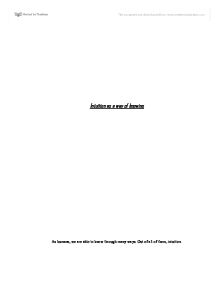 Intuition as a way of knowing

Intuition as a way of knowing As humans, we are able to know through many ways. Out of all of them, intuition is the strangest one. Today, many people still debate whether intuition is a way of knowing. But in order to further expand on the reasoning behind this statement, a definition is crucial. Intuition is the perceiving of truth of something immediately without reasoning or analysis (a priori knowledge). In my opinion it should be one of the most fundamental ways of knowing that we have for the following reasons: a person's thought process starts off using intuition as the primary way of knowing, intuition can be a great source of knowing doesn't matter whether other ways of knowing exist during a certain action or thought. Intuition can't be proved, however that means that it is fundamental. Any statement can be questioned, and if we were to prove every single statement, knowledge would be impossible. Eventually, we would arrive at something we seem to have a direct awareness of and for which we need no further evidence. ...read more.

In this case, my logic takes over, but it ends up incorrect since in the first place I didn't know what the question was asking. Even though intuitions can be false or completely unreliable, people, even today, use this way of knowing very frequently since it solves many day-to-day issues. Intuition is natural for people in every day lives and that is what makes it such an irreplaceable way of knowing. Playing cards is a perfect example. Players do not know what others have in their hand, so; as a result, they can only use limited number of ways of knowing to try to figure that out. Of course, players can cheat and find out through the five senses; however one of the widely used possibilities is intuition. Whatever the player feels they have to play, they play. Furthermore, this is largely focused on probability, but somehow and sometimes intuition helps to pick the right card. That is why it is hard for scientists to justify this way of knowing. ...read more.

If it wasn't for that sudden waking up she would be killed by the roof that collapsed while she was sleeping. Again this can be a very weird case, intuition can be perceived as the way of knowing that saved her, but it just could have been her hearing when she was sleeping. She might have just heard a crack in the ceiling and that is why she woke up and moved her bed to the other side of the room. To conclude, even though intuition can be a faulty way of knowing it is a very useful one. To know something by intuition means that the truth of the proposition is immediately evident and needs no further justification. Not only is intuition the basis of our thinking it also is one that we use in many occasions. From playing cards to saving lives, intuition shapes lives of nearly every individual. Therefore, not only should intuition be a way of knowing, but it should also be one of the most fundamental ones just because hunches do not need further proof, therefore we don't have to spend lots of time analyzing everything which can be both positive and negative. ?? ?? ?? ?? ...read more.