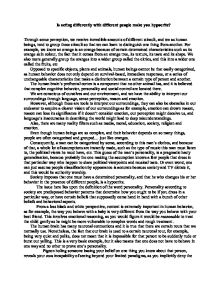 Is acting differently with different people make you hypocrite?

Is acting differently with different people make you hypocrite? Through sense perception, we receive incredible amounts of different stimuli, and we as human beings, tend to group these stimuli so that we can learn to distinguish one thing from another. For example, we know an orange is an orange because of certain determined characteristics such as its orange skin colour, the fact that it comes from an orange tree, its texture, its taste and its shape. We also more generally group the oranges into a wider group called the citrics, and this into a wider one called the fruits, etc Opposed to specific objects, plants and animals, human beings cannot be that easily categorized, as human behavior does not only depend on survival-based, immediate responses, or a series of unchangeable characteristics that make a distinction between a certain type of person and another. The human brain's prefrontal cortex is a component that no other animal has, and it is believed that complex cognitive behavior, personality and social control are located there. ...read more.

Or even worst, one can just assume people classification by appearance is accurate because society and TV dictate it, and this would be authority worship. Society imposes that one must have a determined personality, and that he who changes his or her behavior in the presence of different people, is a hypocrite. The issue here lies upon the definition of the word personality. Personality according to society are predisposed behavior patterns that determine how you ought to be if you dress in a particular way, or have certain beliefs that supposedly come hand in hand with a bunch of other beliefs and behavioral aspects. From a less black and white perspective, context is extremely important in human behavior, as for example, the way you behave with a baby is very different from the way you behave with your best friend. This involves emotional reasoning, as you would figure it would be reasonable to treat the child gently as he might be more vulnerable to complex words and rough treatment . The human brain has many neuronal connections and it is true that there are certain routs that we normally use. ...read more.

All these society paradigms, although implicit, are followed with the most meticulous discipline by many people, in terms of what is expected of you as a member of a certain social class, as a woman, as a 17 or 45 year old, and as the overall "type" of person you are. I found that it is actually looked down upon to get along with different "types" of people, as you're seen as a hypocrite. Through experience, I've noticed that if you restrict yourself to one way of thinking, one way of relating to your unchangeable circle of friends, etc, you develop very strong defense mechanisms through which you see what you want to see, your paradigms become much more difficult to break, and true learning becomes very difficult. Learning itself is the rearrangement of our neuronal structure that changes our behavior one way or another, and the fact that we change, does not mean we're not being faithful to our personality, or that we're hypocrites, but, as Chesterton said: "a very popular error- having the courage of one's convictions; rather it is a matter of having the courage for an attack upon one's convictions". ...read more.