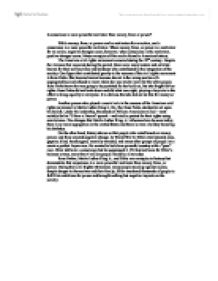 Is conscience a more powerful motivator than money, fame or power?

Is conscience a more powerful motivator than money, fame or power? While money, fame, or power can be motivators for an action, one's conscience is a more powerful motivator. When money, fame, or power is a motivator for an action, negative changes occur; however, when conscience is the motivator, positive changes occur. Many examples of this can be found in American history. The American civil rights movement occurred during the 20th century. Despite the violence that occurred during the period, there were many leaders and activists known for their self-sacrifice and boldness who contributed to the integration of the society. ...read more.

Rosa Parks did not back down and did what was right, playing a key role in the effort to bring equality to everyone. It is obvious that she did not do this for money or power. Another person who played a crucial role in the success of the American civil rights movement is Martin Luther King Jr. He, like Rosa Parks, decided to act upon his beliefs. Under his leadership, thousands of African Americans rallied - most notably for his "I Have a Dream" speech - and tried to protest for their rights using nonviolence. The changes that Martin Luther King, Jr. ...read more.

He wanted to build one powerful country with a "pure" race. Hitler did have a conscience but he suppressed it. If it had not been for Hitler's heinous crimes, more than 6 million people would be alive today. Rosa Parker, Martin Luther King Jr., and Hitler are examples in history that demonstrate that conscience is a more powerful motivator than money, fame, or power. During the Civil Rights Movement, many people stood up against racism, despite danger to themselves and their family; Hitler murdered thousands of people to fulfill his ambitions for power and brought nothing but negative impacts on the society. ...read more.