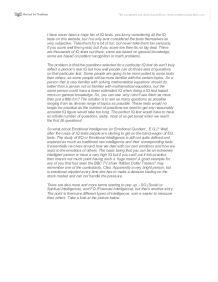 Is EQ more important than IQ?

I have never been a huge fan of IQ tests, yes funny considering all the IQ tests on this website, but I've only ever considered the tests themselves as very subjective. Take them for a bit of fun, but never take them too seriously. If you score well then great, but if you score low then its no big deal. There are thousands of IQ tests out there, some are based on general knowledge, some are based on pattern recognition or math problems. The problem is that the questions selected for a particular IQ test doesn't truly reflect a person's real IQ but how well people can do those sets of questions on that particular test. Some people are going to be more suited to some tests than others, as some people will be more familiar with the certain topics. So a person that is very familiar with solving mathematical equations should do better than a person not so familiar with mathematical equations, but the same person could have a lower estimated IQ when doing a IQ test based more on general knowledge. ...read more.

Take a look at the picture below: Doesn't a picture tell a thousand words! This is basically suggesting that there is a lot more below the surface, or a lot more to how a person can perform than just their obvious intelligence level. I like to think that this is true not only for Emotional Intelligence (EQ) but a whole range of other types of intelligence. As they say, don't judge a book by it's cover! If we think about it, emotions are a very powerful thing. Emotions can motivate us or motivate others, driving people through good leadership not just good management. Somebody once asked me when I was young "What is the difference between a good manager and a good leader?" Think about it. What do you think is more important? How do we measure Emotional Intelligence? With IQ the fundamental process is relatively easy. Measure people's emotions and reactions are a lot harder. We can say how we think we will react to a particular situation, but how do we know until it comes down to crunch time. ...read more.

They may have received good grades on tests in school classes but without a working high level of EQ they are unable to function as adult people in an adult world. All the thing I wrote hire are my opinion. While I was doing my research I read lost of interesting comments on different articles, what do exactly people think about EQ or IQ and all of the opinions were different. For example Mark Eaton 36 years old from California says : I went to school with a guy who had an incredible intellect but no ability to interact with human beings - must have been a lonely existance. Simon Rogers from Washington DC : There is a character I know who has an IQ in excess of 160. But he was hopeless with woman, his clients, and anyone other than close friends and family. This are people who think that EQ is more important, like I do. But there are people who think that for better carrier you need more IQ than EQ. So I don't think that there is the correct answer for everyone, because everything depends upon the person and the situation. ...read more.