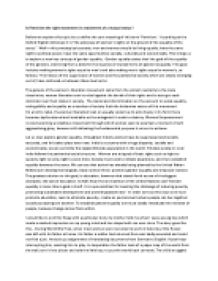 Is Feminism the right movement in attainment of a mutual status?

﻿Is Feminism the right movement in attainment of a mutual status? Before we explore this topic let us define the core meaning of this term ?Feminism.? According to the Oxford English dictionary it is "the advocacy of women?s rights on the ground of the equality of the sexes.? Well in this prototypical scenario, men and women should be living equally, have the same right to political power, have the same opportunities socially, culturally and economically. This brings us to explore a new key concept of gender equality. Gender equality states that ?the goal of the equality of the genders, stemming from a belief in the injustice of myriad forms of gender inequality. This goal includes making women's rights equal to men's and also making men's rights equal to women's, as follows.? The history of the suppression of women and the patriarchal society which are slowly emerging out of, have confused us between these two terms. ...read more.

Till date society in rural India follows the patriarchal social structure. Women are stripped of basic rights such as right to speech; right to vote; right to even drive. Society must seek to initiate awareness, and try to establish equality between the sexes. We can see that action has already being planned by the United Nation Millennium developmental goals, Goal number three: promote gender equality and empower women. The greatest solution to this goal, is education, however that stands forth as one of the biggest obstacles, the lack of education. As Kofi Anan the ex-chairman of the United Nations said ?Gender equality is more than a goal in itself. It is a precondition for meeting the challenge of reducing poverty, promoting sustainable development and promiting awareness.? In order sort out this issue one must promote education, seek to eliminate poverty, create an environment where people can live together socially accepting one another. ...read more.

He upturned all the other pieces and found that the back had parts of the human body. He placed them all together taped them clumsily and got the picture of a man. When he turned the taped picture around he saw that the map of the world had come together. He showed it to his father who was astonished, and his father asked how he had managed to put the map together, to which the little boy replied, ? That was easy dad, I put the man right and the world became right.? This story correlates to the fact that the change and development of this world can only take place if we fix the individual, fix each one of us to then fix society. Society is formed by us, and the only way we can achieve gender equality is if we change our mind set. Nothing can change the world more, the change we make- the change of human mind and attitude. ...read more.