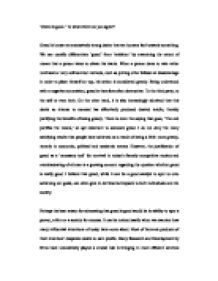 'Greed is good.' To what extent do you agree? Greed is known as excessively strong desire that we humans feel towards something. We can usually differentiate 'greed' from 'ambition' by examining the extent of means that a person takes to obtain his wants. When a person dares to take rather unethical or very self-centred methods, such as putting other fellows at disadvantage in order to place himself on top, his action is considered greedy. Being understood with a negative connotation, greed is therefore often destructive: To the third party, to the self or even both. On the other hand, it is also increasingly admitted that this desire so intense to succeed has effectively produced desired results, thereby justifying the benefits of being greedy. There is even the saying that goes, 'The end justifies the means,' an apt statement to advocate greed. I do not deny the many satisfying results that people have achieved as a result of being a little more greedy, namely in economic, political and academic arenas. ...read more.

Because the yearning for achievement is so intense, one often neglects or overlooks moral values, blinded by the powerful psychological drive to succeed: Air, land and water pollution caused mainly by inconsiderate, profit-driven firms producing too much and recycling too little; America's 'self-initiated' war in Afghanistan for crude oil; Human experiments carried out by the Nazi and Japanese during the World War II for their own medical research. Far too often, the people and firms who have crossed the ethnic lines for greed have resulted in woeful consequences in one way or another: Global warming and climate change is happening at an accelerating rate, affecting lifestyles of almost all creatures, including us, on the earth. Thousands of innocent Afghanistans are killed, subjected to racial discrimination or denied of basic necessities during the war. Through the human experiments, the victims and their descendants have experienced their human rights being grotesquely violated and developed resentment towards particular groups of race. ...read more.

This means the potential damages, harms and number of victims resulted by greed-initiated activities might soar, which are often destructive in one way or another. Although admittedly greed may guarantee one's achievement of goals, if being greedy is taken for granted for anyone's desire to succeed, the chance of greed abuse may soar. Eventually, the blatant 'worshipping' of 'greed' may bring in more disastrous consequences than ever. In conclusion, it can be observed that greed can be both good and bad in terms of its consequences and motives. However, in my opinion, greed has got more harmful impacts on us and our surroundings than its benefits. A single person or firm's excessive desire to achieve something disseminate undesirable impacts on many others. Furthermore, once people's general view on greed starts to shift from 'disapproving' to 'relative' or even 'approving' due to its attractive ability to spur them on, the risks and number of 'victims' might even soar further. Therefore, as far as greed's outweighed harms and destructive potential is concerned, I do not believe that greed is good to a large extent. ...read more.