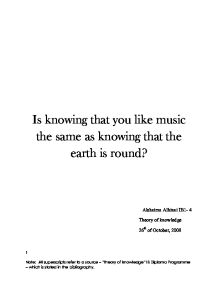 Is knowing that you like music the same as knowing that the earth is round? Alshaima Alhinai IB1- 4 Theory of knowledge 26th of October, 2008 In this essay I shall attempt to see under what circumstances is knowing that you like music different from knowing that the earth is round, and by looking at the areas of knowledge - such as the arts and the natural sciences - and the ways of knowing - such as emotion and language. Music is part of an area of knowledge called The Arts. There are two theories which explain (the nature of) the arts; the first is the emotional theory and the second is the mimetic theory. The emotional theory states that the arts are (subjective and) a way in which an artist expresses emotion. The mimetic theory states that "the arts imitate the nature of the world,"1 for example when drawing or painting still life. An imitation however, does not need to be an accurate representation of nature, but could capture the essence of what something really is. ...read more.

"The earth is round" is a scientific claim found out by natural sciences. Natural sciences involve using the scientific method (observation, reason, and experiment)3 to prove or falsify a scientific claim. The claim "the earth is round" has not yet been falsified and so it is thought to be a fact. It has gone through a series of tests and reasoning. The reasoning behind making this scientific claim confident is the fact that4; * The claim that the earth is flat has been falsified; the world has no edge. * With a round earth there is (/should be) a horizon. * People should be able to see further, the higher up the go - at the time the theory was made, this reasoning was proven by the idea that someone at the mast of the boat could see further than someone on the deck of the boat. * Whether sailing east or sailing west it should be possible to reach a certain point on earth - also at the time the theory was made, "sightings of ...read more.