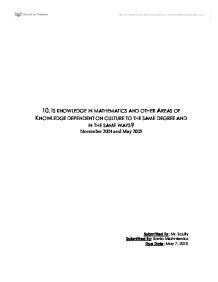 Is knowledge in mathematics and other Areas of Knowledge dependent on culture to the same degree and in the same ways?

10. IS KNOWLEDGE IN MATHEMATICS AND OTHER AREAS OF KNOWLEDGE DEPENDENT ON CULTURE TO THE SAME DEGREE AND IN THE SAME WAYS? November 2004 and May 2005 Submitted To: Mr. Scully Submitted By: Sonia Michniewicz Due Date: May 7, 2010 Course: Theory of Knowledge Word Count: 1486 words Culture is the way of life that we are brought up to live in. We can define culture as the framework of shared meanings which people who belong to the same community use to help them interpret and make sense of the world. Culture defines the lifestyle of people along with their values and beliefs. Culture can be expressed through language, customs, traditions, thinking, behavior, faith, music, food and in many other ways called cultural traits. All these features contribute to the growth and/or reduction of knowledge in certain areas of knowledge. Culture tends to differ from region to region around the world and that means that in each region the cultural influence on knowledge is different, however in the title the area of math is specifically mentioned. Math is considered to be a 'universal' language which means that the cultural traits of language is made equivalent for all, suggesting that mathematical knowledge is not dependent of culture. ...read more.

Science has been considered adjacent to mathematics as an Area of Knowledge, but there are so many subtopics to science that must be considered that one cannot generally talk about the degree of dependence of culture on science. With physics, culture has been known to play a major role in the type and amount of knowledge that the general public was allowed to know and if anyone tried to cross the line they would be discredited which resulted in the loss of knowledge for centuries. Galileo discovered that the Earth revolved around the Sun which interfered with the cultural mindset that humans were the centre of the universe. To prevent this conflict, the Church sentenced Galileo to permanent house arrest; to stop him from publishing his knowledge and affecting the culture. This demonstrates how science was dependent on culture to thrive. Religion, which is a cultural trait, was able to delay knowledge about the Earth's movement for so many centuries that it demonstrates how culture can censor a discovery's entry into the world which then limits and changes the knowledge of science. In contrast to mathematics, science has a higher dependency rate on culture than math, even though they are considered adjacent areas of knowledge. ...read more.

The arts play a major role in shaping culture and that can influence the type of knowledge we want to accept. Recently, the earthquake in Haiti has influenced many artists to sing songs for relief to Haitians. Without this form of art the donations would not be as massive and the knowledge about the situation in Haiti may not have spread as quickly. Each area of knowledge is faced by a different way and degree of cultural dependence. The degree of the influence is different in diverse areas of knowledge but the way that culture is able to contribute to areas of knowledge tend to be similar. In the case of science, math and the arts, knowledge is driven by necessity, beliefs, practices, curiosity, inclination and affinity which can all be considered cultural traits. As discussed earlier, math has little dependence on culture but traits like necessity and curiosity motivate the farther growth for knowledge in this subject. Knowledge in mathematics and other areas of knowledge are thus unarguably dependent on culture for their improvement. Word Count: 1486 words ?? ?? ?? ?? 5 | Page ...read more.