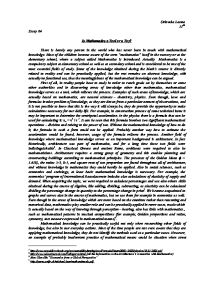 Is Mathematics a Tool or a Toy?

Orlovska Lasma 11IB Essay #4 Is Mathematics a Tool or a Toy? There is barely any person in the world who has never been in touch with mathematical knowledge. Most of the children become aware of the term "mathematics" itself in the nursery or at the elementary school, where a subject called Mathematics is introduced. Actually Mathematics is a compulsory subject at elementary school as well as at secondary school and is considered to be one of the most essential fields of study. Some of the knowledge obtained during the Math's course is directly related to reality and can be practically applied, but the rest remains an abstract knowledge, with actually no functional use, thus the meaningfulness of the mathematical knowledge can be argued. First of all, in reality people have to study in order to reach goals set by themselves or some other authorities and in discovering areas of knowledge other than mathematics, mathematical knowledge serves as a tool, which relieves the process. Examples of such areas of knowledge, which are actually based on mathematics, are natural sciences - chemistry, physics. Even though, laws and formulas involve problem of knowledge, as they are drawn from a particular amount of observations, and it is not possible to know that this is the way it will always be, they do provide the opportunity to make calculations necessary for our daily life. ...read more.

Even though in the areas of knowledge which are more based on the emotions rather than reasoning and numerical data, mathematics play smaller role and can be practically applied in rarer cases, music which is actually based on the way of knowing through perception - hearing, also has links with mathematics., such as mathematical patterns in musical compositions (for example, Golden proportions and ratios, symmetry, tact measure expressed in mathematical means)4. Mathematical knowledge can be practically useful not only when researching other fields of knowledge, but also in our everyday actions. Most of the time people are not even aware that they are applying mathematical knowledge, they do not identify the methods used at a particular cases. However, an example of probably inadvertent practice of mathematical means could be situation when street sweeper scatters salt or send on icy and slippery pavements. Of course, not the highest mathematics are used, and the calculations are probably not even put down on a paper, but still when calculating how much salt or sand will be necessary for scattering a particular area, the street sweeper is responsible for, mathematical knowledge is applied. For example a proportion may be put up - if one bag of salt is enough for scattering 10 square meters, then unknown amount of bags will be needed for scattering 55 square meters. ...read more.

to me unnecessary to learn logarithms, if in the real life there is no way to see them and actually it is hard to imagine where the knowledge of them could be applied. Some of the mathematical knowledge can be assumed to be a toy also in the hands of the mathematicians, who puts themselves a challenge, to find out something new, to widen the are of mathematical knowledge, without actually any purpose. To conclude, I would like to say that mathematics can actually be divided into two parts. One of which is the knowledge that can be applied, thus can be considered to be a tool, and the other part consists of the mathematical knowledge that could be called a toy, because of inability to be practically utilized. Of course it is not possible to draw a strict line between the two groups, because the division differs from each individual, as every person in his life can apply various amount of the mathematical knowledge, however, it can be assumed that such division might exist. Therefore, the question whether mathematics is a tool or a toy cannot be answered firmly. Word count - 1285 1 http://www.ncpublicschools.org/accountability/testing/eoc/FormulaSheets/2001-2002/physics10-31-2001.pdf 2 http://www.nexusjournal.com/Salingaros.html (all the information on the Architecture's connection with Mathematics) 3 Alan Glanville "Economics from a Global Perspective" 4 http://perso.unifr.ch/michael.beer/mathandmusic.pdf ...read more.