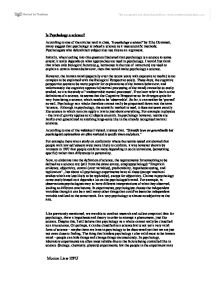 Is Psychology a Science? According to one of the articles read in class, Is psychology a science? by Ellie Dommett, many suggest that psychology is indeed a science as it uses scientific methods.

Is Psychology a science? According to one of the articles read in class, 'Is psychology a science?' by Ellie Dommett, many suggest that psychology is indeed a science as it uses scientific methods. Psychologists who defend their subject also use this as an argument. Initially, when looking into this question I believed that psychology is a science to some extent; it really depends on what approaches are used in psychology. I would first think that when only biological factors (e.g. hormones in the role of attraction) are used to explain a certain human behaviour, then that would make psychology a science. However, the human mind (especially over the recent years with exposure to media) is too complex to be explained with the Biological Perspective solely. These days, the cognitive perspective seems to be more popular for explanations of the human behaviour, and unfortunately the cognitive approach (internal processing of the mind) cannot be so easily studied, as it is the study of 'unobservable mental processes'. ...read more.

rather than differences in personality. Now, to elaborate into the definition of science, the requirements for something to be defined as a science are: (still from the same source, simplypsychology) "Empirical evidence, objectivity, control (over variables), predictability, hypothesis testing, and replication". Just about all psychology experiments have all these (except unethical studies which are less likely to be replicable), except for objectivity. Claims in psychology come easily biased as it depends a lot on the psychologist's mind. For example, in observations psychologists may to have different interpretations of what they observed, leading to different conclusions. In experiments, psychologists choose the independent variables though it can be a well many other things that could've been the independent variable and lead to the same result. In a way psychology is almost as subjective as the arts. Like previously mentioned, we are able to conduct research and collect empirical data for psychology, draw a hypothesis and theory in order to attempt a phenomena, just like science. ...read more.

Perhaps one day if a machine was invented to really read and analyse minds, then psychology could be seen no different to the study of particles and electrons. The machine would help to obtain objectivity, which is a component that psychologists up to these days still lack. An American philosopher Thomas Kuhn (1990), said that 'psychology is a pre-science' which supports my theory above. As philosopher Kinder (1929) said, the lack of progress in certain sciences - and I will be referring to psychology here - is because of the 'lack of suitable methods for the investigation'. The instruments used in psychology are human minds - humans study humans in psychology. The instrument itself so far is deemed as impossible to obtain objectivity. In conclusion, I believe that psychology is a science, but we have not yet found an appropriate method that would let us discover things about the human mind that have certain laws, just like biology, chemistry, and physics. Note: Science itself is a term created by humans - the definition for this can very well change. ...read more.