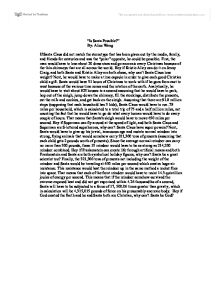 "Is Santa Possible?" By: Alice Wang If Santa Claus did not match the stereotype that has been given out by the media, family, and friends for centuries and was the "polar" opposite, he could be possible. First, the man would have to lose about 20 dress sizes and go anorexic every Christmas because of the thin chimneys that are all across the world. Hey if Kristie Alley can do it on Jenny Craig, and both Santa and Kristie Alley are both obese, why can't Santa Claus lose weight? Next, he would have to make a time capsule in order to give each good Christian child a gift. ...read more.

Assuming that there are 91.8 million stops (supposing that each household has 3 kids), Santa Claus would have to run .78 miles per household, which is calculated to a total trip of 75 and a half million miles, not counting the fact that he would have to go do what every human would have to do every couple of hours. That means that Santa's sleigh would have to move 650 miles per second. Hey if Superman can fly around at the speed of light, and both Santa Claus and Superman are S-lettered superheroes, why can't Santa Claus have super powers? ...read more.

Finally, the 321,300 tons of presents not including the weight of the reindeer and Santa would be traveling at 650 miles per second which creates huge air resistance. This resistance would heat the reindeer up in the same method a rocket flies into space. That means that each of the front reindeer would have to resist 14.3 quintillion joules of energy per second. This means that if the reindeer somehow survived the extreme exposed heat and did not get vaporized within 4.26 thousandths of a second, Santa will have to be subjected to a force of 17, 500.06 times greater than gravity, which in calculation will be 4,315,015 pounds of force on his presumably anorexic body. Hey if God created the Earth and he and Santa both are Christian, why can't Santa be God? ...read more.