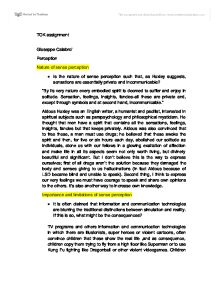 Is the nature of sense perception such that, as Huxley suggests, sensations are essentially private and incommunicable?

TOK assignment Giuseppe Calabro' Perception Nature of sense perception * Is the nature of sense perception such that, as Huxley suggests, sensations are essentially private and incommunicable? "By its very nature every embodied spirit is doomed to suffer and enjoy in solitude. Sensation, feelings, insights, fancies-all these are private and, except through symbols and at second hand, incommunicable." Aldous Huxley was an English writer, a humanist and pacifist, interested in spiritual subjects such as parapsychology and philosophical mysticism. He thought that men have a spirit that contains all the sensations, feelings, insights, fancies but that keeps privately. Aldous was also convinced that to free these, a man must use drugs; he believed that these awoke the spirit and then, for five or six hours each day, abolished our solitude as individuals, atone us with our fellows in a glowing exaltation of affection and make life in all its aspects seem not only worth living, but divinely beautiful and significant. But I don't believe this is the way to express ourselves; first of all drugs aren't the solution because they damaged the body and senses giving to us hallucinations (in fact Aldous because of LSD became blind and unable to speak). ...read more.

Watching these movies, as consequence, children have a very violation of the conscience making unaccountable changes of the behavior. Music is another way to spread subliminal messages. Sometimes if these songs are listened on inside out, we can find these (an example is the song "Better" of "You Better than me making Judas Priest to be guilty as they convinced two teenagers to suicide with the lyrics "Do it, Do it". In conclusion subliminal messages manipulate people through their senses convincing them to buy more and more a kind of product. Linking questions * What can be meant by the Panchatantra saying "Knowledge is the true organ of sight, not the eyes"? Is it necessary to have clear ideas to see? "Knowledge is a true organ of sight, not the eyes" is a quite interesting quote by Panchatantra. The sight is one of senses through which we receive information from outside. These information must be worked out .It exchanges from active perception to passive perception. ...read more.

The observation of phenomenon is the first step of the method that begins with the focus of the problem that we want to study and it's necessary not to have a preconception (that means to have an idea formed without true opinions or direct experience). For example, in a chemistry experiment, I had put an Mg ribbon into the Bunsen flame and I've seen that it glowed with a white shiny light and I've balanced seeing that its mass was changed. How was that? There had been a transfer of electrons from the Oxigen to the Mg Ribbon. Of course you cannot see this passage of electrons, but the study of the theory told me exactly what was going to happen. Thus, observation itself cannot be enough to reach knowledge but we need to verify and test what we observe. Anyway, great discoveries of science sometimes, come from great intuitions with no need of pre-formed concepts. In the end we can state that a good mix of observation and study makes the path of human knowledge more reachable. ...read more.