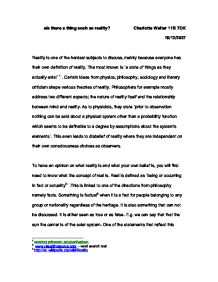 Is there a thing such as reality?

eIs there a thing such as reality? Charlotte Walter 11B TOK 18/12/2007 Reality is one of the hardest subjects to discuss, mainly because everyone has their own definition of reality. The most known is `a state of things as they actually exist� 1 . Certain ideas from physics, philosophy, sociology and literary criticism shape various theories of reality. Philosophers for example mostly address two different aspects; the nature of reality itself and the relationship between mind and reality. As to physicists, they state �prior to observation nothing can be said about a physical system other than a probability function which seems to be definable to a degree by assumptions about the system's elements�. This even leads to disbelief of reality where they are independent on their own consciousness choices as observers. To have an opinion on what reality is and what your own belief is, you will first need to know what the concept of real is. Real is defined as `being or occurring in fact or actuality2� .This is linked to one of the directions from philosophy namely facts. ...read more.

Senses such as pain, temperature and sense of balance are also called kinesthetic5 senses. As we rely on our senses since it seems usual to consider what the senses illustrate as truth. Empiricists also see this as knowledge of the world. Senses make use of illusion and perception to show the truth we want to believe our selves. One of these is vision. By the use of optical illusions we can notice that the mind sees what it wants to see. We can not say that we describe a certain object the way because we understand the three dimensionality of space and the objects in built in these, or because we learn it from experience. E.g. when we have seen such an object in our past, when we see this again we can describe it perfectly because it is part of the memory. Therefore it would be more likely that we describe objects, or colors or anything else from previous experience .In some cases our description could be influenced by our culture. ...read more.

When children know the scent, they can describe it from memory and hence define it as a particular scent such as peppermint, butter et cetera. When we do not know the scent we can not define them as 'existing' and there for not part of the 'reality'. Last but not least; sound. Also this plays an important role to the perception and what we consider real. The sound is heard in the temporal lobes. Our brain interprets the multitude of sound signals we receive, comparing the sounds with each other and grouping them in a sequence. Our nerve cells can decide whether or not to pass on a given signal. The brain is used therefore as a filtering machine. Making not all existing sounds exist in our minds. Without consciously knowing we block sounds, images and scent. If we do not know what we consider "existing" and what we can describe as non-existing we can not define reality. Reality is a concept of beliefs and knowledge. Because beliefs and knowledge differs for each person we can not say that reality is the same for each individual. It will be an everlasting discussion what reality is, and till which extend it exists. ...read more.