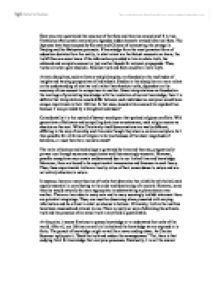 Is there absolute truth in society? One can never know if the information provided to him is whole truth, the unbiased and complete account or just another faade for national propaganda. Thus, truths are never quite absolute.

Have you ever questioned the accuracy of the facts and theories around you? It is true. Textbooks often contain nationalistic agendas hidden beneath revised historical facts. The Japanese have been accused by Koreans and Chinese of extenuating the carnage in Nanjing and the Malaysian peninsula. If knowledge from the most prevalent form of education deviates from the reality, to what extent are the factual accounts we know, the truth? One can never know if the information provided to him is whole truth, the unbiased and complete account or just another fa�ade for national propaganda. Thus, truths are never quite absolute. Absolute truth and facts could be a mere myth. Artistic disciplines, such as history and philosophy, are founded on the multitudes of insights and varying perspectives of individuals. ...read more.

Coincidentally it is the myriad of devout worshipers that sparked religious conflicts. With generations of believers and compelling doctrines as sustenance, each religion seems as absolute as the next. Within Christianity itself denominations are vastly different; differing in the way of worship and rites even though they share a common scripture. Is it then possible for all forms of religion to be true because of the sheer magnitude of believers, or must there be a monistic stand? The realm of science and technology is governed by laws and theories, pragmatically proven true through numerous experiments and thus seemingly accurate. However, possible exceptions may remain undiscovered due to our limited time and knowledge. Moreover, there are bound to be experimental inaccuracies and biasness in each theory. ...read more.

Ultimately, truth is the realities have been reasoned and rational to one. There is really no way of obtaining the ultimate truth and the presence of an actual truth in any field is questionable. At this point, it seems frivolous to pursue knowledge or to understand the truths of the world. After all, our lifetime on earth is limited and the knowledge we are exposed to is finite. The pursuit of knowledge might as well be a never ending chase. As Charles Seymour aptly puts it, "Seek the truth and endure the consequences." Yet, there is that undying thirst for knowledge that everyone possesses. Eventually, it is not the answer that satisfies us, it is the experience gained through the arduous process of seeking answers that broadens our perspectives and sheds new light to existing knowledge. To grow as a person and to mature in thought, that is the real goal in life. ...read more.