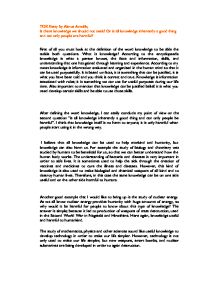 Is there knowledge we should not seek? Or is all knowledge inherently a good thing and can only people are harmful?

TOK Essay by Almos Antolik; Is there knowledge we should not seek? Or is all knowledge inherently a good thing and can only people are harmful? First of all you must look at the definition of the word knowledge to be able the tackle both questions. What is knowledge? According to the encyclopaedia knowledge is what a person knows, the facts and information, skills, and understanding that one has gained through learning and experience. According to my notes knowledge is information evaluated and organised in the human mind so that it can be used purposefully. It is based on facts, it is something that can be justified, it is what you have been told and you think is correct and true. Knowledge is information associated with rules; it is something we can use for useful purposes during our life time. Also important to mention that knowledge can be justified belief: it is what you need develop certain skills and be able to use those skills. After defining the word knowledge, I can easily conclude my point of view on the second question "is all knowledge inherently a good thing and can only people be harmful". I think that knowledge itself is no harm to anyone; it is only harmful when people start using it in the wrong way. ...read more.

In fact, in some countries it is strictly forbidden to study cloning. Why do you think this is? Governments can already see that some of us will use cloning in the wrong way and will make money out of it. It can be a huge business in the future. How awesome would it be to create another Einstein or Stalin? Government therefore want to avoid this in the future and ban cloning. I believe that there should be no knowledge at all which we should not seek, because knowledge itself is neutral, it does not harm anyone. The problems only start to come when we start using them in the wrong way. Some people's religions for example disagree with certain types of knowledge. It is really a matter of opinion of each individual of what type of knowledge we should or should not seek. Going back to the middle-ages, the Christian churches forbid the study of science. At the time hundreds and thousands were killed who claimed that the earth was round. That knowledge was simply forbidden to keep the majority under control, under the control of religion, although a little later everybody knew that in fact the earth is round. ...read more.

We are destroying other life so that we survive. By cutting down rainforests and releasing harmful gases into the atmosphere creating global warming we are at the same time wiping out entire species of animals and plants and at the same times we are harmful to ourselves. So I assume that again, possessing knowledge itself does not harm anyone, nor benefit anyone. Knowledge from a harmful person can be passed on to a good person without the result of any harm. The second person still has the choice of whether to use the knowledge for good or harmful purposes. This, l think is the most important point that we should consider when tackling the question, is there knowledge we should not seek? Therefore to the other question, is all knowledge inherently a good thing and can only people are harmful, l would say that yes only people can be harmful, knowledge itself cannot help anyone nor harm anyone in any possible way at all. If someone is harmed, that is the result of the people not the knowledge itself which we can say was miss used in this case, it is the people's decisions how to use there knowledge after all. Since knowledge itself is neither good nor harmful, there is no reason to avoid certain categories of knowledge. Every type of knowledge equally has the potential to develop daily life, and interfere with it. ...read more.