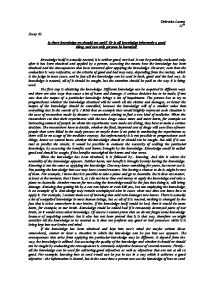 Is there knowledge we should not seek? Or is all knowledge inherently a good thing, and can only persons be harmful?

Orlovska Lasma 11IB Essay #1 Is there knowledge we should not seek? Or is all knowledge inherently a good thing, and can only persons be harmful? Knowledge itself is actually neutral, it is neither good, nor bad. It can be partially evaluated only after it has been obtained and applied by a person, assessing the means how the knowledge has been obtained and the consequences that have occurred after applying the knowledge. However, even then the evaluation is very subjective, as the criteria of good and bad may vary, depending from the society, which is the judge in most cases, and in fact all the knowledge can be used in both, good and the bad way. As knowledge is neutral, all of it should be sought, but the attention should be paid to the way it is being used. The first step is obtaining the knowledge. Different knowledge can be acquired in different ways and there are also ways that cause a lot of harm and damage. A serious decision has to be made, if one sees that the output of a particular knowledge brings a lot of impairment. The person has to try to prognosticate whether the knowledge obtained will be worth all the victims and damages, or better the output of the knowledge should be cancelled, because the knowledge will of a smaller value than everything lost in the search of it. ...read more.

Another reason for not using the knowledge could be the fact that doing it, will bring damage. Knowing that getting hit by a car can injure or even kill you, but not employing the knowledge, is an example of it. Knowledge may remain unemployed also in cases when one does not know how to apply it. For example, I cannot make use of knowing that acid rain damages tree leaves. There is actually a lot of unapplied knowledge in most human beings, but as all of it is neutral, nothing is changed by the fact that it exists somewhere in our brains. If the knowledge itself would be bad, then it would do some harm, for example, to our brain. Knowledge could be called bad if it constantly destroyed parts of our brain, or it would erase other knowledge. Of course I cannot prove that we do not forget some knowledge because of acquiring another, but it also has not been proved that it is that way, therefore we might consider all the knowledge to be neutral as it does not perform any good or bad processes while it is being kept into our brains and mind. If the knowledge has been obtained and kept into one's mind (or maybe written down somewhere), sooner or later a situation in which the knowledge can be put into use appears. ...read more.

As an example I could mention a very current issue - probable war in the Afghanistan. Lets accept the fact of the atomic weapons in Afghanistan as certain, so they have already applied the knowledge of constructing the weapons, and undoubtedly they have the knowledge how to apply those weapons. In case if they decide to make use of the in ware against USA, then the consequences of it will be destructive to the inhabitants of the United States, but the people of Afghanistan probably will be rather satisfied. For me, it seems obvious that the consequences are negative as I cannot approve killing of innocent people, but for those in Afghanistan it may seem fine, and neither person has the rights to say that their perception of things is wrong. Knowledge, as a justified true belief, is neutral, it is only possible to make subjective assessments of the way the knowledge has been obtained and the way it has been applied, but as those evaluations are highly biased no quality of knowledge can be estimated. As knowledge can be neither good, nor bad, people are those who may use the knowledge in harmful or destructive manner, but only subjectively harmful or destructive manner, as also the evaluation of it can vary. Therefore it is possible to conclude that the knowledge itself is highly neutral, and the assessments made in connection with it are greatly subjective. Word count: 1308 ...read more.