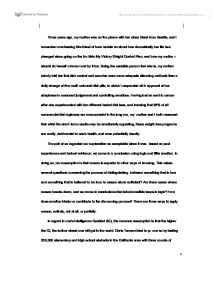 It is All in the Reason

Three years ago, my mother was on the phone with her close friend from Seattle, and I remember overhearing this friend of hers ramble on about how dramatically her life has changed since going on the Nu Skin My Victory Weight Control Plan, and how my mother should do herself a favour and try it too. Being the sensible person that she is, my mother calmly told her that diet-control and exercise were more adequate slimming methods than a daily dosage of five multi-coloured diet pills, to which I responded with approval of her adeptness in reasoned judgement and controlling emotions. Having lost an aunt to cancer after she experimented with two different herbal diet teas, and knowing that 95% of all commercial diet regimens are unsuccessful in the long run, my mother and I both reasoned that while the short-term results may be emotionally appealing, these weight loss programs are costly, detrimental to one's health, and even potentially deadly. The pair of us regarded our explanation as acceptable since it was based on past experiences and factual evidence; we came to a conclusion using logic and little emotion. In doing so, our assumption is that reason is superior to other ways of knowing. This raises several questions concerning the process of distinguishing between something that is true and something that is believed to be true: is reason alone sufficient? ...read more.

Therefore it was with great disappointment when Terman had to conclude at the end of his experiment that "Intellect and achievement are far from perfectly correlated" (Gladwell 90). Terman's reasoning was not flawed in the sense that he took what he thought was the single discerning factor and maximized it in each of his subjects. His reasoning was limited because he failed to recognize that relying solely on reason and not taking into account other factors such as opportunities the "Termites" encountered and their family backgrounds would not yield the success he hoped for. He believed whole-heartedly that his subjects would thrive, but in reality they were merely average, failures even, when taken into account that these were child prodigies. In his studies he made full use of a method he thought was both reasonable and logical, but there are instances in our lives where all reason, perception, and emotion is defied, and we use only our intuition to make great leaps in logic. Like any other student wishing to go to a post-secondary institute in the fall of 2010, I was faced with a difficult decision this fall in terms of college selection: whether or not to apply to American ones. I was discouraged by the fact that international students only comprised roughly 10% of the average American freshmen class, but I also evaluated the amount of ...read more.

in awe as the friend she had not seen in three years got out of the car, 70lbs and eight pant sizes slimmer. My mother had always searched for a diet that would accommodate her hectic schedule, but however tempted she was by her friend's ruthless showcasing, she was not swayed. She noted the significant change in her friend's figure, but she also saw the loose skin on her arms that had not kept up with the dramatic change in weight loss, and also the dark circles under her eyes that resulted from a lack in essential nutrients. The friend, out of desperation to lose weight, had deluded herself into believing that these were merely slight disadvantages to the Weight Control Plan, but my mother saw the truth, and told her friend once again that she refused to go on the Plan. Reason, when isolated from other ways of knowing, is limited in its perspective if it fails to identify relevant variables that may alter the outcome of a certain event. When collaborating with emotion and perception, reason is able to reach its full potential in discerning what is true and what is believed to be true. There is also the case where all three of these ways of knowing are ignored, and intuition alone leads us to make split-second decisions that very often represent our true intentions. ...read more.