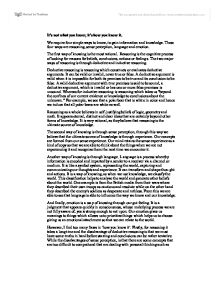 Its not what you know; its how you know it.

Language is a process whereby information is encoded and imparted by a sender to a receiver via a channel or medium. It is like a symbol system, representing the world, capturing and communicating our thoughts and experience. It can transform and shape thought and actions. It is a way of knowing, as when we use knowledge, we classify the world. This classification helps to analyze the world and generate other beliefs about the world. One example is from the British media from their wars where they described their own troops as cautious and resolute while on the other hand they described the enemy's soldiers as desperate and ruthless. From this we are able to see that language is able to influence the way we know and our knowledge. And finally, emotion is a way of knowing through our gut feeling. It is a judgment that appears quickly in consciousness, whose underlying process we are not fully aware of, yes is strong enough to act upon. ...read more.

Language is able to manipulate our thoughts in such a way that we become corrupted by it. Another negative aspect of language is that sometimes we cannot explain ourselves due to language barriers. This quote from Michael Polyani sums it all up 'I know more than I can say.' And as for emotions, is that our intuitive feeling cannot answer to many higher level and scientific questions. One example is 'is the world round?' Thus I disagree with it due to the flaws I mentioned above. However, if we put together all the different ways we know to gain knowledge the flaws would be minimized. Therefore I infer that it does not matter how we get the information, but it is the information that we know that is crucial as it is what we know that defines a person. If what we know is corrupted, than we would be corrupted as a whole. So I believe that what we know is more important than how we know. (787 words) ?? ?? ?? ?? ...read more.