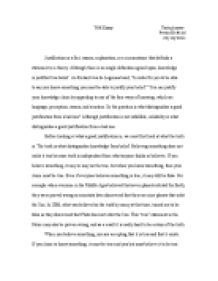 Justification, what distinguishes a good justification from a bad one?

﻿TOK Essay Tariq Ameer Period D #116 22/10/2011 Justification is a fact, reason, explanation, or a circumstance that defends a statement or a theory. Although there is no single definition agreed upon, knowledge is justified true belief. As Richard van de Lagemaat said, ?In order for you to be able to say you know something you must be able to justify your belief.? You can justify your knowledge claim by appealing to one of the four ways of knowing, which are language, perception, reason, and emotion. So the question is what distinguishes a good justification from a bad one? Although justification is not infallible, reliability is what distinguishes a good justification from a bad one. Before looking at what a good justification is, we must first look at what the truth is. The truth is what distinguishes knowledge from belief. Believing something does not make it true because truth is independent from what anyone thinks or believes. If you believe something, it may or may not be true, but when you know something, then your claim must be true. Even if everyone believes something is true, it may still be false. For example when everyone in the Middle Ages believed that seven planets orbited the Earth, they were proved wrong as scientists later discovered that there are nine planets that orbit the Sun. ...read more.

Language could be looked at as acquiring knowledge from other people by talking to them or by reading it somewhere. As you may well know, not everything you are told or you read is true. So acquiring knowledge through language is not always reliable or a good justification. Even if the knowledge comes from the authority, it is still may not be a reliable source. It is really hard to claim I know something regarding a celebrity by using knowledge I acquired from a tabloid magazine, because those types of magazines are considered unreliable sources by many including me. But, I can claim I know something regarding a celebrity by acquiring knowledge from his/her mother or their autobiography. Although they are not the most reliable sources, they are at least believable and trusted more than tabloid magazines. The point is that there is always the possibility of the information being false no matter how reliable the source is, especially when it comes to language, as it is second-hand knowledge. Another way to justify your claim is through perception. Knowledge acquired from perception is based on your senses and personal experience. Perception can be a very reliable source, however our senses may deceive us sometimes. ...read more.

They argue, by using counterexamples, that in some cases beliefs are both true and justified but do not appear to be genuine cases of knowledge. In response other philosophers, like Richard Kirkham, argued that knowledge is justified true belief if, and only if, the justification is infallible and infeasible. You can claim to know something if your true belief is justified. Beliefs, emotions, claims, laws, theories, and actions can all be justified, but whether it is a good justification or a bad one depends on reliability. You can also use words, diagrams, and mathematics to improve on your justification. No matter which of the four ways of knowledge you are using to justify you knowledge claims, you should remember that they are not infallible and they are not always reliable sources of knowledge. Even if your sources are reliable, that does not mean they are the truth. Knowledge tools can both contribute to our knowledge and be an obstacle to it. We need to test them against one another when trying to establish the truth. Only time could tell what is the truth. Because as technology develops, new discoveries have proved what was believed to be the truth for thousands of years is wrong. Word count: 1586 Sources: 1.Theory of Knowledge by Richard van de Lagemaat 2.http://www.slideshare.net/t0nywilliams/tok3-2120735 3.http://dictionary.reference.com/browse/justification 4.http://studyingeconomics.ac.uk/what-makes-good-justification/ 5.http://www.sphsgator.net/sphsteachers/walshm1/TOK%20Essay%20Information/Steps%20for%20Writing%20a%20Good%20TOK%20Essay%20(TOK%20Essay%20Information%206).html 6.http://discover-your-mind.co.uk/faqs/r1-writing%20style.htm 7.http://chronicle.com/blognetwork/castingoutnines/2006/11/25/what-makes-a-good-mathematical-justification/ 8. http://tinybuddha.com/quotes/tiny-wisdom-stop-explaining-your-feelings/ ...read more.