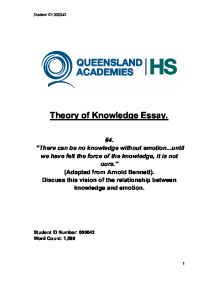 Theory of Knowledge Essay. #4. "There can be no knowledge without emotion...until we have felt the force of the knowledge, it is not ours." (Adapted from Arnold Bennett). Discuss this vision of the relationship between knowledge and emotion. Student ID Number: 000042 Word Count: 1,599 Emotions, as a way of knowing, play a part in swaying our thoughts and behaviour as well as affecting the way in which we know. Arnold Bennett makes two claims in his statement, firstly that "There is no knowledge without emotion" and secondly "...until we have felt the force of the knowledge, it is not ours." The first claim is the equivalent of saying "All knowledge requires emotion," and seems to be invalid as it is a generalization that can be refuted by the fact that there can be some knowledge without emotion. The next statement made by Bennett however, seems to have some merit in the claim as knowledge has been known to produce emotional responses, especially if the knowledge is valued by the knower. In this essay, I will attempt to discuss the connection between knowledge and emotion and show that although one can have knowledge without emotion, knowledge that we value most is knowledge in which we are emotionally invested. ...read more.

The certainty of death is also common knowledge and a fact of life. It is usually, however, until something major happens, such as the death of a close one, that knowledge of death becomes tied to emotions like grief, anger and shock - as was the case for me when a family member of mine passed away and a close friend who lost a parent. Before the death of one of my family members, death was simply a fact - just as knowledge of Oxygen having the chemical symbol of 'O' is a fact. It did not have any value to myself and nor did it bring about any sort of emotion and had seemed to be something that was experienced by others, not myself. With the passing of someone so close to me, my view of death changed immediately because it was now tied with grief. This change brought about the realization of the fragility of life and furthermore made me treasure the time I spend with family and friends. Although it can be seen through the given examples that knowledge obtained by the person can produce an emotional reaction, knowledge that is valued by one person may not be valued by another due to cultural bias. ...read more.

Victor Frankenstein, the protagonist, is caught up with his desire and passion for knowledge and stumbles upon the secret for giving life. Upon creating the wretched creature, his emotions change to that of fear and anger realizing that the knowledge he had gained was not what he expected it to be. His feelings for the creature distort his overall view of knowledge thus hindering his search. Despite negative emotions such as rage, hopelessness and irritation having the drawback of impeding a person from gaining knowledge, these emotions do not completely obstruct the gain of knowledge. Such feelings do not last very long and there are actions one can take to change an undesirable mood, such as frustration, into one that is more desirable, like calmness. It is something we are all capable of doing at one point or another - to partake in an activity which dispels emotions that affect us negatively. Surely, if the knowledge being obtained mattered enough then the negative emotions that deter us would then be overcome. Emotions are our guiding and pushing factor as well as inhibiting us when it comes to knowledge pursuit. Yet, having the famous Archimedes run naked through the streets screaming "Eureka!", it would seem then that knowledge cannot be valued or understood until one has experienced it emotionally, shedding some truth on Arnold Bennett's statement - "There can be no knowledge without emotion...until we have felt the force of the knowledge, it is not ours. ...read more.