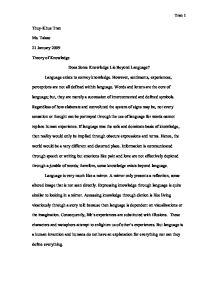 Thuy-Khue Tran Ms. Takao 21 January 2009 Theory of Knowledge Does Some Knowledge Lie Beyond Language? Language exists to convey knowledge. However, sentiments, experiences, perceptions are not all defined within language. Words and letters are the core of language; but, they are merely a succession of interconnected and defined symbols. Regardless of how elaborate and convoluted the system of signs may be, not every sensation or thought can be portrayed through the use of language for words cannot replace human experience. If language was the sole and dominate basis of knowledge, then reality would only be implied through obscure expressions and terms. ...read more.

Accessing knowledge through diction is like living vicariously through a story told because then language is dependent on visualizations or the imagination. Consequently, life's experiences are substituted with illusions. These characters and metaphors attempt to enlighten us of other's experiences. But language is a human invention and humans do not have an explanation for everything nor can they define everything. For example, how can you explain how a sneeze or a yawn feels like to someone who has never sneezed nor yawned? The scientific explanation of what happens to your body during a sneeze is relatively straight forward; although the description of the sensations that come with a sneeze is complicated enough to leave you speechless. ...read more.

We have depended on it to document our past; history, religion, and politics as we have lived them are recorded through language. Language has evolved with humans; from hieroglyphics to sign language, its design has changed to fit our needs. For this reason, language has become the most dominant form of communication. The place we live in has now become a world of words. But, knowledge is not limited to words because some wisdom transcends language. Language is a learning tool; however, it is not the key to all intelligence. The truth does not reside in a statement; but in the senses: hearing, sight, taste, smell and touch. Genuine wisdom can only be found through both language and personal experiences. ?? ?? ?? ?? Tran 1 ...read more.