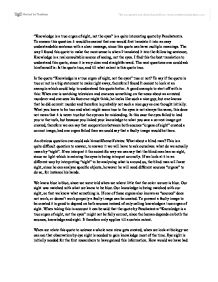 Knowledge is a true organ of sight

"Knowledge is a true organ of sight, not the eyes" is a quite interesting quote by Panchatantra. To answer this question it would be easiest that one would first translate it into an easy understandable sentence with a clear message, since this quote can have multiple meanings. The way I found this quote to make the most sense is when I translated it into the following sentence; Knowledge is a real consultable source of seeing, not the eyes. I find this the best translation to understand this quote, since it is very clear and straightforward. The next questions one could ask him/herself is: Is the quote true, and till what extent is this quote true. Is the quote "Knowledge is a true organ of sight, not the eyes" true or not? To say if the quote is true or not is a big statement to make right away, therefore I found It easiest to look at an example which could help to understand this quote better. A good example to start off with is this: When one is watching television and one sees something on the news about an arrested murderer and one sees his face one might think, he looks like such a nice guy, but one knows that he did commit murder and therefore is probably not such a nice guy as one thought initially. ...read more.

When taking this in account it can be said that the quote by Panchatantra "Knowledge is a true organ of sight, not the eyes" might not be fully correct, since the human depends on both the sources, knowledge and sight. It therefore only applies till a certain extent. When we relate this quote to science a whole new view gets created, when we look at biology we can see that observation by eye sight is needed to gain knowledge most of the time. Eye sight is initially needed for the first researchers to have gained this information. How would we have had all this knowledge if we did not find it out initially, it was initially found out by observing by eye, and therefore the eyes can also be seen as a true organ of sight. If eye sight was not available human beings would not have gained a lot of knowledge, and therefore human beings have to rely on both sources of sight and not just one. For facts; known things, one could say that knowledge is the only true organ of sight. This because if one does not know red is red he/she could call if differently. ...read more.

When this knowledge was not available, one could not depend on our knowledge mostly to develop our sight, therefore it would need, what can be seen as more primitive ways of creating sight. By looking at all of the previous examples one might conclude that knowledge is incredibly a better organ of sight than the eyes, it is more fundamental, however to say that the eyes are not an organ of sight would be wrong. This would be wrong, since a lot of knowledge is achieved by observing with your eyes. All of the known knowledge did not come naturally it had to be observed or found in a different way initially. If one of the organs is not working properly for instance when one believes blue to be red a faulty image will be created as said before, therefore both organs are dependent on each other, and both needed to have sight. I found it nice to look at it as a body; a body has various organs, some more important ones than others, but when one of the organs malfunctions an error will occur; therefore we cannot neglect a single organ like knowledge, or eyes. All organs have a certain importance to them and they all apply till a certain extent. ?? ?? ?? ?? ...read more.