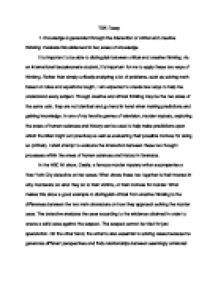 Knowledge is generated through the interaction of critical and creative thinking. Evaluate this statement in two areas of knowledge.

TOK Essay 1. Knowledge is generated through the interaction of critical and creative thinking. Evaluate this statement in two areas of knowledge. It is important to be able to distinguish between critical and creative thinking. As an international baccalaureate student, it's important for me to apply these two ways of thinking. Rather than simply critically analyzing a lot of problems, such as solving math based on rules and equations taught, I am expected to create new ways to help me understand every subject. Though creative and critical thinking may be the two sides of the same coin, they are not identical and go hand in hand when making predictions and gaining knowledge. In one of my favorite genres of television, murder mystery, exploring the areas of human sciences and history can be used to help make predictions upon which the killer might act (creative) as well as evaluating their possible motives for doing so (critical). I shall attempt to evaluate the interaction between these two thought processes within the areas of human sciences and history in forensics. In the ABC hit show, Castle, a famous murder mystery writer accompanies a New York City detective on her cases. What draws these two together is their interest in why murderers do what they do to their victims, or their motives for murder. ...read more.

Are they experiencing any emotional distress? Are there any "tells" to their reactions? Do they have any reason to kill the victim? So, we can see how the two types of thinking interact in the process of forensics. Psychology, which is part of human sciences, comes into play when the detectives need to understand the suspects and try to find every possible explanation to the murderer's motive and get the suspect to either confess their crime or help them in their investigation. Sometimes, it's a mind game that tries to get the other player to "show his cards." The detectives need to know what works and what doesn't in order to effectively get a suspect to talk. In their experience with their job, most of the time, their intimidation and use of "threats" eventually pays off, with the exception of cases with professionals, or contract killers. Psychology is used to predict the suspects' possible next move, which is effective for cases involving tracking down a serial killer. The use of psychology, or human sciences, to gain knowledge is very limited. Because every person is unique in their actions and reactions, people cannot be expected to react the same way under the same circumstances, but there are a few generalizations that may still be useful. ...read more.

In reference to the knowledge issue, history and human sciences play an essential part in a homicide investigation because that is where explanations about why people do what they do come from and whether it's actually "normal" for the person to do it. One very good quote from the TV show helps generalize the killer's mind and allows their motives to make sense. "There are only three reasons to commit a murder: love, money, and to cover up a crime." However, I would probably include that a serial killer is somewhat with great trauma in their past, and they commit murders because their minds are unstable. Either way, this is still a very simplistic idea that addresses the history of why humans do what they do. Once the murderer's motive is verified, then the rest of the investigation would be based on evidence and analysis on how the murderer carried out this crime. Most of the knowledge that detectives gain their knowledge during the investigation come from the interaction of creative and critical thinking, which make up their occupation of being a detective, or a murder mystery novelist. Their whole thought process is engaged with these two ways of thinking and the outcome of the investigation relies on their skill to analyze the facts and find different perspectives or motives. The use of such cognitive skills or strategies must be in coexistence to increase the probability of a desirable outcome, like solving a case. ...read more.