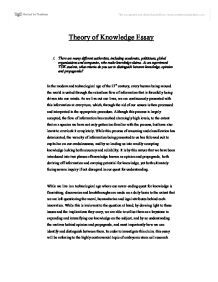 Knowledge Vs Opinion Vs Propaganda

Theory of Knowledge Essay 1. There are many different authorities, including academies, politicians, global organisations and companies, who make knowledge claims. As an experienced TOK student, what criteria do you use to distinguish between knowledge, opinion and propaganda? In the modern and technological age of the 21st century, every human being around the world is united through the relentless flow of information that is forcefully being driven into our minds. As we live out our lives, we are continuously presented with this information at every turn, which, through the aid of our senses is then processed and interpreted in the appropriate procedure. Although this process is largely accepted, the flow of information has reached alarmingly high levels, to the extent that as a species we have not only gotten too familiar with the process, but have also learnt to overlook it completely. While this process of reasoning and classification has deteriorated, the veracity of information being presented to us has followed suit to capitalize on our credulousness, and by so leading us into readily accepting knowledge lacking both accuracy and reliability. It is by this nature that we have been introduced into two phases of knowledge known as opinion and propaganda, both deriving off information and carrying potential for knowledge, yet both ultimately facing severe inquiry if not disregard in our quest for understanding. ...read more.

While analysing any source, whether propaganda, opinion or even knowledge, it is crucial to understand the motivation, experience, research, and citations behind each of the references given. By doing this, and assuming that the source did in fact have reliable information, we are then required to test this out against the opinions present. However when looking at the opinions, this is not just limited to the outsiders perspective but also to the message behind the propaganda. This process makes a large portion of the procedure, where opinions in conjunction with facts are combined to create a final consensus, which we believe to be completely accurate in both a theoretical and practical sense, with no necessary relation to either the opinion or the propaganda presented. This end result can then be classified as a conclusion in science, or knowledge in terms of understanding. On the opposite scale of this equation lies the propaganda of knowledge interpretation. In this example this takes shape as religion, acting as the evident force fighting against stem cell research, while using any lengths to defame it. Having received the information from science, which is ultimately accurate and truthful, this party acts out against this, attempting to steer away the impression that the knowledge of stem cell research is spreading on its public. ...read more.

The search for understanding does in fact stem off information, opinion and propaganda, where critical thinkers undergo the procedure that they have grown used to. For me this criterion has been narrowed down to the knowledge area of science, where the differentiation between knowledge, opinion and propaganda takes place through a scientific experiment write up. This can however relate back to limitless areas of knowledge, however the choice is largely based on the individual and their way of knowing. For example, another criteria could be shown in a mathematical manner, where the original data, in either a graph of numbers can be interpreted as propaganda. Which is then put into an equation (acting as opinion), to create a constant or a formula (knowledge) applying to the entire data. There is no single criterion to distinguish between knowledge, opinion and propaganda as the information we are receiving is constantly changing. However as critical thinkers we can adapt to this by applying information to different areas of knowledge, where variables or 'double checking' are evident to ensure that the information we are receiving is in fact reliable, aiding us to form our opinion on it, and if this opinion is largely shared by the people involved and cannot be disproved, it can finally be seen as knowledge. ...read more.