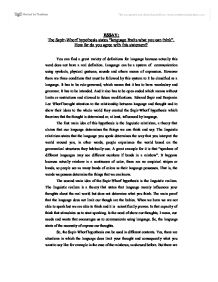 Language limits what you can think.

ESSAY: The Sapir-Whorf hypothesis states "language limits what you can think". How far do you agree with this statement? You can find a great variety of definitions for language because actually this word does not have a real definition. Language can be a system of communication using symbols, physical gestures, sounds and others means of expression. However there are three conditions that must be followed by this system to it be classified as a language. It has to be rule-governed, which means that it has to have vocabulary and grammar. It has to be intended. And it also has to be open-ended which means without limits or restrictions and allowed to future modifications. ...read more.

The linguistic relativism states that the language you speak determines the way that you interpret the world around you, in other words, people experience the world based on the grammatical structures they habitually use. A great example for it is that "speakers of different languages may see different numbers if bands in a rainbow". It happens because actually rainbow is a continuum of color, there are no empirical stripes or bands, so people see as many bands of colors as their language possesses. That is, the words we possess determine the things that we can know. The second main idea of the Sapir-Whorf hypothesis is the linguistic realism. ...read more.