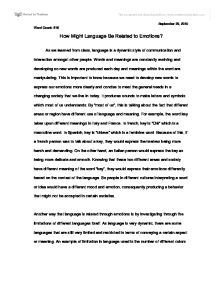 As we learned from class, language is a dynamic style of communication and interaction amongst other people. Words and meanings are constantly evolving and developing so new words are produced each day and meanings within the word are manipulating. This is important to know because we need to develop new words to express our emotions more clearly and concise to meet the general needs in a changing society that we live in today. It produces sounds to make letters and symbols which most of us understands. By "most of us", this is talking about the fact that different areas or region have different use of language and meaning. ...read more.

So people in different cultures interpreting a word or idea would have a different mood and emotion, consequently producing a behavior that might not be accepted in certain societies. Another way that language is related through emotions is by investigating through the limitations of different languages itself. As language is very dynamic, there are some languages that are still very limited and restricted in terms of conveying a certain aspect or meaning. An example of limitation in language used is the number of different colors they have in both chinese and english. In chinese, there are only a limited range of colors to choose from (blue, green, purple, red) ...read more.

This is just like what we have learned in 1984 about the language of newspeak, where words are broken down and simplified into the most basic form. The people following under this system will have the ability to produce certain emotions and feelings and impossible to construct their own ideas and thoughts. With the concept of languages having restrictions and limitations, it can limit our range of emotions as we cannot formulate our ideas in our mind. The two paragraphs shows that there is certainly a correlation between language and emotions. By investigating more about the different aspect of language, we realize that it triggers back to our emotions as a way of thinking. September 29, 2010 Word Count: 516 How Might Language Be Related to Emotions? September 29, 2010 Word Count: 516 How Might Language Be Related to Emotions? ...read more.