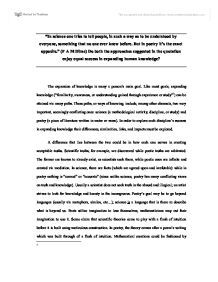 Many differences and similarities can be seen whist taking science and poetry as a way of knowing; however, it is imperative we notice the links between the two as tools for human knowing.

"In science one tries to tell people, in such a way as to be understood by everyone, something that no one ever knew before. But in poetry it's the exact opposite." (P A M Dirac) Do both the approaches suggested in the quotation enjoy equal success in expanding human knowledge? The expansion of knowledge is many a person's main goal. Like most goals, expanding knowledge ("familiarity, awareness, or understanding gained through experience or study"1) can be attained via many paths. These paths, or ways of knowing, include, among other channels, two very important, seemingly conflicting ones: science (a methodological activity, discipline, or study) and poetry (a piece of literature written in meter or verse). In order to explore each discipline's success in expanding knowledge their differences, similarities, links, and impacts must be explored. A difference that lies between the two could be in how each one serves in creating acceptable truths. Scientific truths, for example, are discovered while poetic truths are arbitrated. The former are known to already exist, as scientists seek them, while poetic ones are infinite and created via mediation. ...read more.

There are many differences between the two, with campaigners of both parties claiming each one more important to expanding human knowledge and criticizing each other's successes. Another view is that these differences are superficial and superfluous in the light of their similarities and importance to each other while expanding one realm. To understand each realm's contribution to human knowledge their similarities how they are connected to each other is also of vital importance. It is generally accepted that poets and scientists are both ingenious but the former lack analytical skill; the latter lack a powerful creative muscle. In an interesting speech made by Mae Jemison (who in 1992, was the first African-American woman to go into space and is now a campaigner for science education) she clearly identifies their links and similarities. She claims that science and art (poetry) work are both incarcerations of human creativity. She explains that science vs. poetry is not the analytical vs. the intuitive, as most believe. An example given was Albert Einstein's infamous formula E=mc2. ...read more.

Their sources are the same (human creativity), their results are the same(expanding human knowledge), and differ only in superficial and formal ways, with one being incomplete without the other. They are both immersed in each other's existence, weather one be the origin of the other, an extension of the other, or in collaboration with the other to create real solid outcomes, or expansions of human knowledge. In conclusion, many differences and similarities can be seen whist taking science and poetry as a way of knowing; however, it is imperative we notice the links between the two as tools for human knowing. They might yield different results achieved through different paths but both arise from the human quest to understand themselves and the universe. Without each other neither would be complete and neither would human potential to gain concrete knowledge, credible enough to satisfy the intuitive as well as the analytical aspect found in every single person. To me, expanding human knowledge is simply a goal. Science and poetry are different paths that intertwine continuously creating a third intermediary path, which is the only way to reach any expansion of knowledge, which, if restricted to any single realm, would be utterly futile. ...read more.