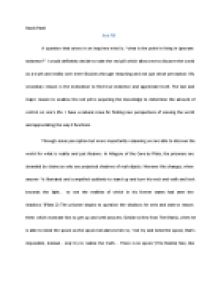 Matrix Essay- would you take the red or blue pill? TOK - 90%

﻿Harsh Patel Red Pill A question that arises in an inquirers mind is, ?what is the point in living in ignorant existence?? I would definitely decide to take the red pill which allows me to discover the world as a truth and reality over mere illusions through reasoning and not just sense perception. My secondary reason is the motivation to find true existence and appreciate truth. The last and major reason to swallow the red pill is acquiring the knowledge to determine the amount of control on one?s life. I have a natural crave for finding new perspectives of viewing the world and appreciating the way it functions. Through sense perception but more importantly reasoning we are able to discover the world for what is reality and just illusions. In Allegory of the Cave by Plato, the prisoners are stranded by chains as only see projected shadows of real objects. However this changes, when anyone ?is liberated and compelled suddenly to stand up and turn his neck and walk and look towards the light? to see the realities of which in his former states had seen the shadows.?(Plato 2) ...read more.

When the prisoner goes towards the light, ?he will suffer sharp pain? but that now, when he is approaching nearer to being and his eye is turned towards more real existence, he has a clearer vision.? (Plato 2) Now the prisoner is a real ?being? and understands his real existence in the world which he did not have before. In the Matrix, very similar scenario is presented when Morpheus enables Neo to open his eyes for the first time. Neo recloses his eyes when he questions, ?Why does my eyes hurt?? (The Matrix) and Morpheus tells him the reason that because he is using them for the first time. Only now is he able to tell his true existence of being alive, that all his life he was living in a virtual world and now that he is free in the sense that he is ?a being? now. I would feel likewise if I had to discover that currently I am in a projected world and not experiencing reality. Theoretically, if I was to discover my real existence, it would scar my life in knowing that all I have lived so far was unreal and I have no actual family however I would begin appreciating the wonderful truth. ...read more.

I believe it would be a great feeling to recognize that we are in control of our lives and it is not god who decides our destiny. Furthermore, it kills me know that I god has created everything perfect and my fate is predetermined regardless my decision making. Descartes feels similar as he believes, ?that there is a God who is all powerful, and who created me, such as I am, has, for a long time, obtained steady possession of my mind.? (Descartes 3) Descartes constantly thinks about the prospect of god and his creations to determine when god created him, is he under his control or of his own. Alike in The matrix, Morpheus asks Neo if he believes in fate, Neo neglects that belief, ?because [he] doesn?t like the idea that [he is] not in control of [his] life.? (The Matrix) Like me, Neo wants to know whether it is god that decides one?s fate or they command their own lives, but he believes there is no god. Even though I may not discover the truth, I like to believe there is god however I am in full control of my life. In conclusion, if the red pill is my path to discovery of reality I would definitely take it without doubt. ...read more.