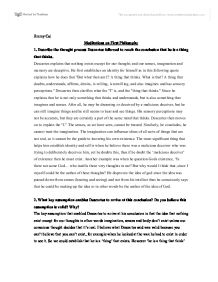 Jimmy Cui Meditations on First Philosophy 1. Describe the thought process Descartes followed to reach the conclusion that he is a thing that thinks. Descartes explains that nothing exists except for our thought; and our senses, imagination and memory are deceptive. He first establishes an identity for himself as in this following quote explains how he does that "But what then am I? A thing that thinks. What is that? A thing that doubts, understands, affirms, denies, is willing, is unwilling, and also imagines and has sensory perceptions." Descartes then clarifies what the "I" is, and the "thing that thinks." Since he explains that he is not only something that thinks and understands, but is also something that imagines and senses. After all, he may be dreaming or deceived by a malicious deceiver, but he can still imagine things and he still seems to hear and see things. ...read more.

and not from his intellect thus he consciously says that he could be making up the idea or in other words be the author of the idea of God. 2. What key assumption enables Descartes to arrive at this conclusion? Do you believe this assumption is valid? Why? The key assumption that enabled Descartes to arrive at his conclusion is that the idea that nothing exist except for our thoughts in other words imagination, senses and body don't exist unless our conscious thought decides that it's real. I believe what Descartes said was valid because you can't believe that you can't exist, for example when he looked at the wax he had to exist in order to see it. So we could establish that he is a 'thing' that exists. However 'he is a thing that think' since Descartes notes that if the physical world does not exist then it also implies he is non existence. ...read more.

Therefore, thought above all else is inseparable from being. Descartes concludes that, in the strict sense, he is only a thing that thinks. 3. An important philosophical question asks whether persons remain the same over time. How does Descartes's theory of self respond to this question? Explain People intellect do remain the same over time as Desecrates concludes that he is "nothing but a thinking thing; that is, a mind, or intellect, or understanding, or reason" and that "even bodies are not, properly speaking, perceived by the senses or by the faculty of imagination, but by intellect alone... I manifesfly know that nothing can be perceived more easily and more evidently thank my own mind" Descartes theory is saying that technically your thought or intellect remains the same because thought is the only real thing that exists and doesn't gather experience since he refute the idea of imagination, senses and body which have experiences so thought will always remain the same. In conclusion reason gives the ability to believe these 'things' because reason precede experience. ...read more.