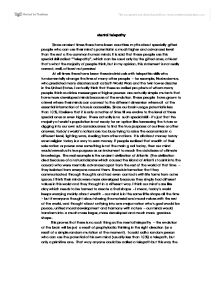 Mental Telepathy Since ancient times there have been countless myths about specially gifted people who can use their mind's potential in a much higher and advanced level than the rest o the common human minds. It is said that these people use this special skill called '"telepathy", which can be used only by the gifted ones, at least that's what the majority of people think, but in my opinion, this statement is not really correct, well, at least not precise! At all times there have been these individuals with telepathic skills who fundamentally change the lives of many other people - for example, Nostradamus, who predicted many disasters such as both World Wars and the twin tower disaster in the United States. ...read more.

Today's world's nations are too busy trying to raise the economics in a different level, fighting wars, stealing from other nations. It is all about money today even religion today is a way to earn money. If people realized that wealth of their sole nation or power over something is not the main goal today, then our mind would reveal us its true purpose as an instrument to reach the database of ultimate knowledge. The real example is the ancient civilization of Atlantis (the civilization died because of a natural disaster which caused the island of Atlantis to sink into the ocean) who were mentally advanced apart from the rest of the world at that time - they isolated from everyone around them. ...read more.

and harmony with nature - our minds would transform into a much more larger, more developed and much more gracious shape . This proves that there is no such thing as the mental telepathy - the evolution of the brain will be just a result of prophylactic thinking in the right direction (or a result of a simple random mutation at the moment). I could call a random person who can use the potential of his own mind (usually less than 10 %) a telepath, but only a primitive one. That way anyone could be called a telepath but this way the word would lose its own meaning. Mankind is just rookies who are yet to learn to use their most important instrument properly. ...read more.